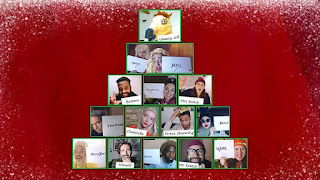 It's panto season! Well, oh no it isn't. At least not in the normal way. Cinderella comes to BBC Two, with a Comic Relief twist...

This Christmas Eve, twelve stars from the world of theatre, film, comedy and entertainment join forces from around the globe to take on what could be Comic Relief’s toughest celebrity challenge yet. To perform a brand new adaptation of the much loved pantomime Cinderella - all via video call, all from their own homes… and all without rehearsal!

Written by the Dawson Brothers, based on an original script by Ben Crocker, the hour-long show, Cinderella: A Comic Relief Pantomime For Christmas ,will be a retelling of the timeless panto classic, with a star-studded cast assembling online and giving everyone a very special version of the fairy-tale.

Academy Award winning acting royalty Olivia Colman (The Crown, Fleabag, The Favourite) will be making her panto debut as Fairy Godmother and will be joined by all-star cast that includes:
Guz Khan (Man Like Mobeen, Four Weddings And A Funeral) as Buttons,
Tom Hollander (Rev, Us, The Night Manager) as Baron Hardup,
Helena Bonham Carter (The King’s Speech, The Crown, Harry Potter) as Lady Devilia,
Anya Taylor-Joy (The Queen’s Gambit, Emma) as Cinderella,
Regé-Jean Page (Roots, Bridgerton) as Prince Charming,
Jimmy Akingbola (Rev, In the Long Run) as Dandini,
Aisling Bea (This Way Up, Quiz) as Mrs Snitch,
Tom Davis (King Gary, Murder In Successville) as Mr Snatch,
David Walliams (Britain’s Got Talent) as Major Domo
and actual real life sister and brother Daisy May and Charlie Cooper (This Country) as The Evil Step Sisters.

In addition, there will be music from multi award winning and word renowned music artists - Sam Smith and Leona Lewis - plus there will be a host of cameos too from lots of famous faces including Rosie Jones, Lord Alan Sugar, Claire Foy, James Blunt, David Tennant, Sir Mo Farrah and Hugh Bonneville.

Plus, there is an incredibly famous person making their Pantomime debut as a rather unconvincing horse... but who is Wheezy Jeff? Tune in on Christmas Eve to find out!

On top of all this, legendary artist Quentin Blake has created a host of original hand-drawn illustrations, helping bring the panto to life for everyone watching at home.

And while the public watch, they will also have the opportunity to donate to Comic Relief projects, if they feel able to, that are working to help people living with hunger, struggling with their mental health or feeling lonely or unsafe this Christmas.

Patrick Ho-Ho-Ho-Holland, Controller of BBC Two, said “This is a unique surprise at the end of a year when we all need cheering up. Thank you so much to Richard Curtis and the team at Comic Relief for assembling such a stellar cast to deliver us a pantomime to remember.”

Richard Curtis, Executive Producer and Founder of Comic Relief, added ”We’re hugely grateful to BBC Two and the amazing cast for allowing us to do our first ever pantomime. It’ll be very funny and merry - and also a great seasonal opportunity to raise crucial funds for the projects that will help the most vulnerable people, at home and abroad - especially now when Covid has made things harder than ever for many.”

Cinderella: A Comic Relief Pantomime for Christmas will be broadcast on BBC Two on Thursday 24 December at 8.15pm and will also be available on BBC iPlayer.
Image & info - BBC
Email ThisBlogThis!Share to TwitterShare to Facebook