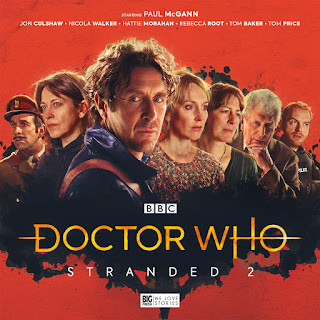 Rebecca Root returns as Tania Bell in Doctor Who: Stranded 2, the second in a series of four full-cast audio drama box sets from Big Finish Productions...

Due for release in March, Doctor Who: Stranded 2 rejoins Paul McGann’s Eighth Doctor, marooned on Earth with a TARDIS that can travel in time, but not space, and a house full of new friends.
The TARDIS is still stranded but the healing process has begun. After living in Baker Street for months, the Doctor, Liv and Helen find their new friends becoming curious about who they really are.

But is it wise to tell them, when their future – and their past – are filled with danger?

And in the shadows, the Curator is watching.

The Doctor wants to take the TARDIS on a test flight. But he has rather more passengers than he’d like. Soon, the crew are stranded once again in an uncertain future. One where planet Earth appears to be dead. And very soon, so will any visitors...

When the Doctor dips into his past to help TARDIS repairs in the present, Andy joins him on a trip to UNIT. In the 1970s, young soldier Ron Winters has just met lab assistant Tony Clare. But in 2020, they need Liv and Helen’s help when their memories start falling apart...

The Doctor takes Zakia and Aisha to see some family history: their grandmother had her own secret life in Baker Street, during World War II. As Tania and Liv try to defuse an unexploded bomb, the sisters face explosive revelations of their own.

2.4 The Long Way Round by John Dorney
Something is wrong with Earth’s future – so the Doctor decides to see it for himself. But very soon, the travellers are captured. Someone seems to know their every move. An interrogator wants answers, but do they even know the right questions?
One of the Doctor’s new housemates, Tania Bell (played by Rebecca Root), made headlines earlier this year as the Doctor’s first transgender companion. Speaking exclusively to Big Finish’s Vortex magazine, Rebecca, who previously appeared in Zaltys and Gallifrey: Time War, admitted that, at first, she hadn’t realised she would be joining the TARDIS team for more than one story.

“It was about a year ago that we recorded Stranded 1, a week or two before Christmas. I thought it was just a single box set but am delighted to be in a storyline that spans an entire series – a great gift to any actor.

“I found out during one of the lunch breaks. Producer David Richardson did his Q&A for the CD extras and one of his early questions was, ‘How do you feel about becoming a companion?’ I knew I was a part of this adventure but I didn’t realise it was going on further so I asked what he meant. And he said, ‘Oh, yes, you’ll be coming back in the next three box sets.’ My jaw hit the floor – I just couldn’t believe it! He said, ‘Didn’t your agent tell you?’ and later that week I spoke to my agent who said, ‘Oh, yeah, there was something else about you doing more! Didn’t I tell you?’ It was such a delightful surprise!”

Rebecca admitted she was surprised by the outpouring of love for her character: “I am delighted by the great comments about her – I feel so embraced by devotees of the show.

“It was most unexpected when Stranded 1 was released last June. There was coverage in the mainstream press and larger entertainment sites. A lot of the Twitterati were going on about her and I had to point out that she’s not in the telly version – not yet!

“I hope Tania carries on with the Doctor for a while. Her relationship with Liv Chenka (played by Nicola Walker) is lovely too. It’s just about two people, and whatever their backgrounds are it doesn’t matter. Two people connecting – that’s all we want, isn’t it?

“What we find in the second box set are pretty difficult things to take. When we think about the future, we don’t only think about our mortality as individuals, but the life of the planet too. Not to be too ‘Extinction Rebellion’ about it, we live on a fragile planet and the Doctor Who storyline really taps into that. The future can be a bit scary, and with what we’ve seen recently with COVID, it is a bit scary.”

Doctor Who: Stranded 2 is now available to pre-order as a collector’s edition CD box set (priced at £24.99), or on download (at £19.99) exclusively from the Big Finish website.

Big Finish listeners can save even more money with a bundle of all four box sets, pre-ordering the entire series for just £88 as a collector’s edition CD box set or £79 as a digital download.

Please note that Big Finish is currently operating a digital-first release schedule. The mail-out of collector’s edition CDs may be delayed due to factors beyond their control, but all purchases of this release unlock a digital copy that can be immediately downloaded or played on the Big Finish app from the release date.
Email ThisBlogThis!Share to TwitterShare to Facebook