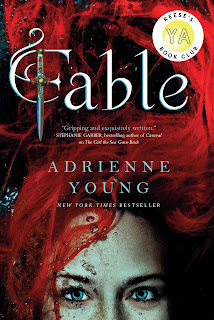 From New York Times bestselling author of Sky in the Deep, Adrienne Young, comes the first book in the fantastical Fable duology, published on 26th January by Titan Books. Thanks to them, you can read a short excerpt from Fable now...

"I slipped the wriggling fish into my shirt and swung the broken trap over my shoulder so that it hung against my back. Darkness fell over the trees and I found my way by moonlight, following the trail until it curved toward the crag and I leaned into the incline as the path grew steep. When the ground abruptly ended at a smooth face of rock, I fit my hands and feet into the holds I’d chiseled and climbed. Once I had my leg over the top, I pulled myself up and looked behind me to the path.

It was empty, the trees swaying gently in the breeze and the light shifting over the cool sand. I ran the rest of the way, until the flat ground dropped off sharply over beach far below. The bluff overlooked the barrier islands, invisible in the dark, but I could make out the glow of a few lanterns swinging from the masts of ships docked for the night. It was the spot I’d sat every morning, waiting for my father’s ship to return, even though he’d told me he wasn’t coming back.

It took me two years to believe him.

I dropped the trap beside the fire pit, unbuckling my heavy belt. The wind picked up as I wrapped my hands around the thick tree trunk that hung over the cliff and shimmied myself up slowly. The ground dropped out from under me, and I looked down to the shore that lay at least a hundred feet below. The night waves were foaming white on the sand. Most dredgers were too heavy to climb out onto the spindly tree without the branches cracking and sending them to their death. I’d almost fallen myself once or twice.

When I was close enough, I reached up into the hollow at the joint of two swollen branches. My fingers found the purse and I swung my arm back, tossing it to the ground behind me before I climbed back down.

I started my fire and skewered the fish on the spit, settling into a comfortable groove in the rocks that overlooked the path. If anyone came snooping, I’d see them before they saw me. I just needed to make it to morning.

The coins clinked together as I shook the purse, spilling them onto the soft sand. Their faces shined in the moonlight as I counted, setting them in neat stacks before me.

Forty-two coppers. After what I would have to spend on skiffs, I needed another eighteen and I’d have enough to barter with West for passage. I had even set aside a little coin to keep me fed and sheltered until I tracked down Saint. I lay back onto the ground and let my legs hang over the edge of the cliff, staring up at the moon as the fish crackled over the fire. It was a perfect, milk-white crescent hanging above me, and I breathed in the salty, cypress-tinged air that was unique to Jeval.

My first night on the island, I’d slept out on the beach, too afraid to go up into the trees where the tents were pitched around burning fires. I woke to a man tearing open my jacket, searching my pockets for coin. When he didn’t find anything, he dropped me on the cold sand and walked away. It took days for me to figure out that every time I fished in the shallows, someone would be waiting on the beach to take whatever I’d caught from me. I ate kelp for almost a month before I found safe places to forage. After almost a year, I finally had enough coin saved from cleaning other peoples’ catches and selling palm rope to buy the dredging tools off Fret, who was too old to dive anymore.

The waves crashed angrily below as the storm winds blew in, and for just a moment, I wondered if I’d miss it. If there was something on Jeval that had become a part of me. I sat up, looking out over the night-cloaked island, where the tops of the trees moved in the dark like churning water. If it hadn’t been my prison, I might even think it was beautiful. But I had never belonged here.

I could have. I could have made myself one of them, working to build my own small gem trade on the barrier islands like so many others. But if I was a Jevali dredger, then I wasn’t Saint’s daughter. And maybe even that wasn’t true anymore.

I still remembered the hum in the belly of the hull and the creak of the hammock. The smell of my father’s pipe and the sound of boots on the deck. I didn’t belong on the land or on the docks or the cities that lay across the Narrows. The place I belonged was gone.

Miles away, where the moonlight touched the black seam of the horizon, the Lark lay beneath the waters of Tempest Snare. And no matter where I went, I’d never get home.

Because home was a ship that was at the bottom of the sea, where my mother’s bones lay sleeping in the deep."
Thanks again to Titan Books and Adrienne Young for allowing us to share this excerpt from Fable with you.

Welcome to a world made dangerous by the sea and by those who wish to profit from it. Where a young girl must find her place and her family while trying to survive in a world built for men.

As the daughter of the most powerful trader in the Narrows, the sea is the only home seventeen-year-old Fable has ever known. It’s been four years since the night she watched her mother drown during an unforgiving storm. The next day her father abandoned her on a legendary island filled with thieves and little food. To survive she must keep to herself, learn to trust no one and rely on the unique skills her mother taught her. The only thing that keeps her going is the goal of getting off the island, finding her father and demanding her rightful place beside him and his crew. To do so Fable enlists the help of a young trader named West to get her off the island and across the Narrows to her father.

But her father’s rivalries and the dangers of his trading enterprise have only multiplied since she last saw him and Fable soon finds that West isn't who he seems. Together, they will have to survive more than the treacherous storms that haunt the Narrows if they're going to stay alive.