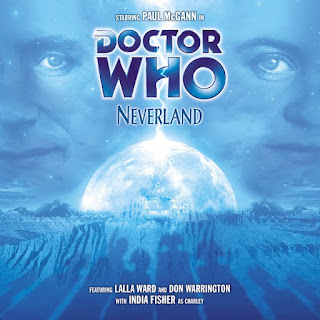 Our Doctor Who audio expert, Tony Cross, delves into the back catalogue available from the Big Finish website. Today is the Eighth Doctor and Charley adventure Neverland...


I have mentioned in previous Eighth Doctor blogs that some of these stories have a real New Who (Moff Version) feel about them. 'Neverland' is one of those stories. An end of season extravaganza that ends up wrapping up the Charley Pollard story arc but leaving us with a nice juicy cliff-hanger on which to hang the new season.

And yet it isn't like that at all, which might sound like something of a paradox (and that's apt in a 'season' full of paradoxes. Big Finish know that their audience isn't really the general public. This is Doctor Who made for Doctor Who fans - even if they are also meant to stand on their own too.

In the first place 'Neverland' is stuffed with Time Lords and the continuity that comes with them. It's got Romana II in it as Lord President for Rassilon's sake. It's got Rassilon in it for Rai...sorry. I must admit though I love the Time Lord's when they are EPIC. The advantage of audio, of course is there are no sets or CGI to disappoint. You just have sound, words and your own imagination, which is a brilliant combination for Doctor Who.

There are war TARDISes, time-travelling Space Stations - I imagined the Space Station from Trial of a Time Lord but perhaps on a slightly smaller scale, there are throw away references to various Time Lord secrets and a whacking great wrecked TARDIS that in my head looks astonishing. It's what the Time Lords were made for and they certainly sound more like the Time Lords of RTD's Time War than the Time Lords of 'The Deadly Assassin'.

It was also lovely to get to hear Lalla Ward as Romana II again. Older but with a sharper edge born of experience. She is Lord President - and in a little Matrix deduced scenario seen by the Doctor she's also seen as the ruthless leader of a rather darker, nastier group of Time Lords wiping the Dalek's from time just because she can, despite the pleading of the Emperor Dalek - and initially you never quite know whether she's on the Doctor's side or not. Lalla Ward does a great job with the part (which shouldn't be a surprise really).

This though is really Charley's story. Finally, the real reason for the weird paradoxes and timey-wimey stuff that's been going on around her is revealed and it is all to do with anti-time. (Initially I thought Omega was going to crop up somewhere what with things anti being his thang but of course his realm is anti-matter, not anti-time.) I won't go into too much detail on this because I haven't got the time (boom, boom) but suffice it to say there's another universe involved with beings in it who want their wreck their revenge upon the 'normal' universe and they have a cunning plan in place to do that with the Time Lords being enemy numero uno.

India Fisher is superb in this. Getting to really stretch the acting muscles [whatever the hell I mean by that] and she gets a couple of lovely speeches on how wonderful the extra time she's been given by the Doctor is and what it means to really live. She's seriously becoming one of my favourite companions despite her occasional forays into jolly hockey sticks territory.

McGann too does a fine job. Again soliloquizing and speechifying with an infectious enthusiasm and behind a facetious exterior hiding a sharp and persistent mind. (He oddly reminds me of Lord Peter Whimsey and his distracting way with piffle that leads people to underestimate him).

Oh and a round of applause for Anthony Keech as Co-Ordinator Vansell who twist and turns throughout the story before....well let's not spoil it. Plus, we get to hear the velvet tones of Don Warrington, which is always a pleasure.

Sentris is the main villain of the piece motivated by a twisted bitterness that had its seed in an act of nobility. She's a bit caught up in the cleverness of her plan however and taunts the Doctor for his inability to kill a friend in order to save the universe. As usual the villain gloats too early (When will they learn) and the Doctor is victorious but has made what appears to be the ultimate sacrifice.

Then...and then the Big Finish bastards spring a whacking great twist onto the end that isn't what I was expecting at all. Grrrr.

I highly recommend 'Neverland' despite its split into two one hour plus long episodes it is the audio equivalent of one of those books you can't put down.