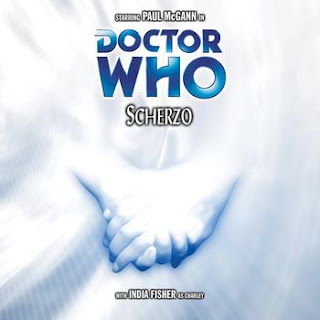 Our Doctor Who audio expert, Tony Cross, delves into the back catalogue available from the Big Finish website. Today is the Eighth Doctor and Charley adventure Scherzo...

That was hard work.

That is not necessarily a bad thing. After all who needs everything to be easy. It's nice to have something that requires thought.

I'm also not sure whether I like it or not. Again, that's not necessarily a bad thing. In fact, in my case it is positively revolutionary. With one or two exceptions I normally find it quite easy to decide whether I like something or not. That decision is - if truth be told - the only critical sense I really have. So, it is nice to listen to something that I'm uncertain about.

It's a two-hander featuring just Charley and The Doctor. They are alone together in the new Universe; the TARDIS is gone, and this is where it all begins and perhaps the new Universe is incapable of dealing with them or they it. Certainly, their senses seem unable to cope. They are blinded by light and forced to join hands. This is limbo of a sort. A changing room perhaps. It is certainly mysterious, and they find themselves in the company of sounds and a repeating evolving corpse. They lose track of everything: time and all their senses...but hearing.

Why are they here?

There's a lot of questions and not too many answers. The Doctor suspects that they were placed here - wherever here is - deliberately but by who? It is all rather uncomfortable and disquieting (if that is a word). The atmosphere of the whole story is strange. It is difficult to classify. Harder to explain. Like a dream that you are trying to elucidate for someone else even as it is being forgotten.

It is also emotionally uncomfortable. I found listening to the Doctor in this almost unbearable. It's not what he's supposed to be like. He's cold, hard and defeatist. He's disappointed to still be alive. He's angry at Charley for betraying him by following him here. He risked his life to save hers and by coming here to die with him she has betrayed him. What was the point of his sacrifice? It is very difficult listening. The first two episodes. There's an emotional pitch in this story that Doctor Who almost never, ever reaches.

Even Charley's professions of love - whatever that means as the Doctor says - are less irritating than I might have expected. Whatever love is, it is discussed here and there is a genuine easing at the end of the story.

But it is all quite hard listening. Can it be described as pleasurable?

The acting is wonderful. Both McGann and Fisher give this their best. It might be that, being written by Rob Shearman, it feels more like a play about change than a Doctor Who story. In fact, it doesn't feel very Doctor Who-ish at all. You could, as was pointed out on Twitter to me, make a reasonable stab at a stage version of this and perhaps drop all the Doctor Who references, and it would still stand up as a work about change. And about love.

I have not mentioned the thing they must defeat, which takes significant advantage of the medium to express itself. It's always fun when Big Finish use audio effectively and they do in this.

Nor have I mentioned the cliff-hanger to Part Three, which is the first time I have ever cringed - in the sense of screwing up my face at something horrible a la horror films - when listening to audio. The sound alone has yuckability.

So, should you listen to this? Yes

Will you like it? I don't know. I really don't.

Do I like it? I think I do but I'm really not sure.

Would I listen to it again? No. At least not for a long while. There are some things you can admire but are so uncomfortable or difficult that you can't or won't re-watch or re-listen. This is one of them for me. Like Nil by Mouth: which was an amazing film with great performances but so emotionally draining that I'm not sure I'm going to watch it again.

So what's the conclusion? Listen to it yourself. Make your own decision. But well done Big Finish for trying something so...difficult.