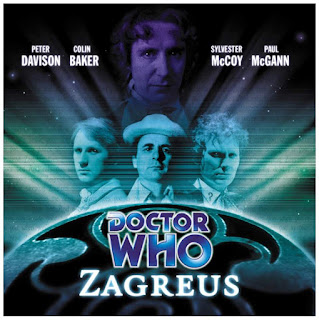 Our Doctor Who audio expert, Tony Cross, delves into the back catalogue available from the Big Finish website. Today is the Eighth Doctor and Charley adventure Zagreus...


Where the hell do you even begin with this?

There's so much going on and so many characters it sometimes becomes difficult to hang on to them all. There's Doctors and not Doctors, there's familiar voices in unfamiliar roles. There's the walking talking TARDIS and a talking cat. There’re rips in the fabric of the Universe. A terrible secret. There's Time Lords past and present. There's Romana and Leela. There's Gallifrey and an alternative Universe. There's Zagreus who gets inside your head. There's Charlotte Pollard and Brigadier Alistair Gordon Lethbridge-Stewart. There's a Mouse General & a Jabberwocky. There's exile and farewells. Bigotry and Vampires. There's fear and death.

It's the 50th Big Finish so they pulled out all the stops. Then tore out the stops completely and went crazy.

The Doctor saved the Universe at the end of Neverland but he - and the TARDIS - seem to have paid a terrible, terrible price. The Doctor is not the Time Lord he was. Charley is caught up in all of this and both she and the Doctor are dragged through a series of rather bizarre situations that might be real but might also be artificially created to help them understand the confusion that's going on around them.

It isn't surreal but it is filled with nonsense but nonsense in the best Carrollian sense of the word but in the end, it is the same old story: a power mad conspirator bent on making the Universe in his image and using the Doctor to do his dirty work. If all power corrupts then Time Lord power corrupts absolutely. When, almost at the end of Zagreus, the Doctor talks to Romana and he reels off a list of his Time Lord heroes that turned out to be disappointments - to put it mildly - he says he doesn't want to be around to see her corruption as Madam President. (And I believe this story links into the Gallifrey series of audios, which are the ongoing adventures of Romana & Leela. I've not listened to them, but this does make me want to do so.)

Paul McGann is brilliant in this. Big Finish do like to keep the Eighth Doctor constantly on the verge of a nervous breakdown and there's something incredibly vulnerable about him, which McGann can get across with a crack in his voice and a little change in pitch. It can be heart-breaking at times, particularly when he pleads with Charley in the final episode. It makes you so bloody frustrated that his only television appearance is that rather dreary Americanised TV Movie.

India Fisher is also damn good as Charley again dealing with everything the universe appears to throw at her with panache. Only right at the end does it look like it all might be too much for her. I confess that there are moments when Charley is a tad irritating but overall this is good work.

It was wonderful to hear Nicholas Courtney's voice again. It's so...reassuring but he gets to go a little beyond the usual Brigadier performance in this story, which is nice.

Lalla Ward and Louise Jameson bring both their old characters back to life in sterling fashion and there's some excellent banter between the two as Romana is a little rude and patronising to Leela in the first instance. And as I love Leela I was hoping Romana might get a polite slap for it. However, all's well in the end.

Peter Davison, Colin Baker & Sylvester McCoy also do some wonderful stuff with their roles, which are both Doctor and not Doctor. Colin Baker is mightily entertaining. Then there's the rest of the cast of thousands who contribute little touches here and there. Sometimes recognisably, sometimes less so.

All in all a fine effort at celebration with a twist. An end to one set of stories, the beginning of another. The Doctor exiled. Again.