Documentary - Into The Grey Zone 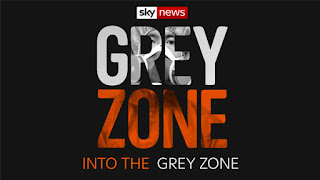 Sky News investigates how warfare is changing from cyber hacks to assassinations in a new podcast documentary series, starting on Monday...

Follow Deborah Haynes and her team as they explore a grey zone between war and peace, where no one is too unimportant to be a target. Discover the covert tactics used by states, criminals and terrorist groups to deceive, gain influence and – at times – kill.

What is the ‘grey zone’?
What do assassinations, cyber hacks and disinformation have in common? They’re all weapons used by states against each other in a grey zone of harm that sits - deliberately - under the threshold of war, but could be just as dangerous if ignored.

Sky News looks into this often invisible battlefield, where anything can be - and is - used as a weapon, from computer hacks and disinformation to assassinations and intimidation.

With world-exclusive interviews with spies and military chiefs, the series offers chilling insight into a murky evolution of warfare that, as the series demonstrates, could unravel the world’s democracies “without a shot being fired”.

Episode 1 – they set out what the grey zone is and then travel to Salisbury with the widow of former Russian spy Alexander Litvinenko to explore one of the most high-profile grey zone attacks on the UK – the attempted assassination of another former Russian agent, Sergei Skripal, and his daughter Yulia and the barrage of disinformation that followed.

Episode 2 – they look at the grey zone weapon of disinformation and how a battle between truth and lies is threatening democratic elections around the world. As part of this episode they meet one of the UK’s best fighters of suspected Russian and Chinese fake news – a battle that he wages from a remote cottage in Scotland, because the frontline is everywhere.

Episode 3 – they explore the grey zone weapon of cyber hack and leak by investigating an attack on a little-known British organisation called the Institute for Statecraft, which ran a programme aimed at combatting suspected Russian disinformation

Episode 4 – they look at the threats posed by cyber attacks, even the potential for a “cyber Pearl Harbour”. As part of this episode they track the WannaCry attack, blamed on North Korea, that hit the National Health Service in the UK in 2017, impacting the care of thousands of patients.

Episode 5 – This is about a new way for the UK to fight back in the cyber grey zone. More will be revealed when this episode launches.

Episode 6 – they investigate the use of proxy forces by states to launch attacks and meddle indirectly in other countries, with a particular look at how Iran allegedly operates in the grey zone.

Episode 7 – This episode focuses on how China is at the heart of a grey zone struggle of values between democracies and authoritarian regimes.

Episode 8 – When the grey zone becomes a war zone and what the future of warfare looks like, with artificial intelligence, hypersonic missiles and space weapons. they look at Russia’s annexation of Crimea and the conflict in eastern Ukraine, talk to those affected and explore what this tells us about the changing character of conflict.

Episode 9 – The final episode will air on 4th March 2021, the third anniversary of one of the most high-profile grey zone attacks on the UK – the attempted murder of former Russian spy Sergei Skripal and his daughter Yulia, and the fake news that followed.
To find out more, subscribe for free to Sky News' Into The Grey Zone podcast, available weekly from Monday 11th January from any of the major podcast suppliers.
Image & info - Sky
Email ThisBlogThis!Share to TwitterShare to Facebook