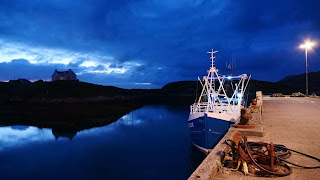 Iorram, the first cinema documentary entirely in Scottish Gaelic, will have its world premiere at the Glasgow Film Festival next month...

Iorram (Boat Song) is an impressionistic portrait of the Gaelic fishing community in the Outer Hebrides, past and present. The inhabitants of the islands today are observed on land and on water, while the ghostly voices of their ancestors tell stories and sing songs about life at the mercy of the sea. This dialogue between past and present is set to an original score by Aidan O’Rourke of Lau, to create an immersive audience experience.

It’s also a love song to a language and culture at risk of extinction within a decade. Once spoken across most of Scotland, Scottish Gaelic has now shrunk to just 11,000 habitual speakers, mainly in the Outer Hebrides, according to a recent study by the University of Highlands & Islands. Yet at the same time, interest in lyrical beauty and cultural value of Scottish Gaelic is booming, with Gaelic schools flourishing in Glasgow and Edinburgh, and more than 560,000 registered learners worldwide signed up to Scottish Gaelic Duolingo.

The fate of Scottish Gaelic language and culture is intertwined with that of the Hebridean fishing community, whose survival is threatened by the shifting tides of Brexit, globalization and climate change.

Iorram brings the beauty and power of Scottish Gaelic to a wider audience, and shows that losing this ancient language and culture will impoverish us all.

It is also a unique cinematic experiment in sound and vision, composed 100% of archive sound recordings of Gaelic speakers in the Outer Hebrides from the 1940s to 1970s, matched with stunning 4k observational footage of island life today, shot by director Alastair Cole over the past three years in all seasons and weathers, on land and on sea.

In the mid-20th century, with the advent of portable sound recording, researchers started visiting the Outer Hebrides to preserve the voices of the islands for future generations. These were the first recordings to capture the oral history of Scottish Gaelic culture which stretches back thousands of years, and once covered the whole of Scotland, but now survives mainly in the island communities off the west coast.

Over the past decade, the School of Scottish Studies Archives has painstakingly digitized and restored these recordings. The filmmakers combed the archive of over 30,000 recordings to find the most vivid, dramatic, playful, emotional and lyrical voices, stories and songs that bring to life the intimate, perilous relationship between the fishing community of the Outer Hebrides and the stormy Atlantic Ocean. In Iorram, these voices are translated with English subtitles for the first time, so that they can be understood, enjoyed and appreciated by non-Gaelic audiences.

The film is produced by Adam Dawtrey and Alastair Cole for Bofa Productions and Tongue Tied Films, in association with MG ALBA and with support from the National Lottery through Screen Scotland. Directed and filmed by Alastair Cole, the film is edited by Colin Monie with original music by Aidan O’Rourke. Executive producers are Mary Bell, Margaret Mary Murray and Mark Thomas.

The filmmakers were supported by an outstanding team of Gaelic-language speakers, translators and experts, including Joan MacKenzie, Gillebride MacMillan (Outlander) and sound designer Michael MacKinnon. It was co-produced by Magnus Course, senior lecturer in social anthropology at the University of Edinburgh, supported by Newcastle University, and made with the extensive assistance of the people and organisations of the Outer Hebrides, including the Western Isles Fishermen’s Association.

Iorram is on at Glasgow Film Festival on February 28th 2021, followed by a virtual UK theatrical release from March 5th 2021 via the Modern Films platform (http://www.modernfilms.com/) in collaboration with key independent cinemas across the UK, and other partner organizations. The film will also be distributed for physical screenings in any cinemas which are allowed to re-open from March 5th onwards.
Image - BBC
Email ThisBlogThis!Share to TwitterShare to Facebook