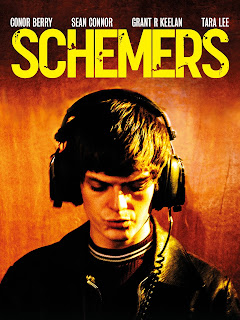 With the film coming to DVD and Digital on 25th January, a reminder of Susan Omand's thoughts on Schemers when she watched it at the Edinburgh Film Festival...

The music business is a cruel and shallow money trench, a long plastic hallway where thieves and pimps run free, and good men die like dogs. There's also a negative side. - Hunter S Thompson.

Any film that starts with a Hunter S Thompson quote immediately captures my interest. I had wanted to see Schemers anyway, purely for nostalgia reasons; I lived in Dundee in the mid 1980s, having gone to university there, and this film is set in the city in 1979, so I wanted to see if the city felt like how I remembered it. I can tell you I was smiling from the start at the accents, the mention of Groucho’s record shop, and various other shops, bars and venues around town that I recognised, all of which immediately made me step back in time. The nostalgia was ramped up for me with news clips and adverts from back in the day setting the scene and, by the time the start credits rolled, I had already bought into the film wholeheartedly.

But what if you’re not acquainted with Dundee? Schemers also has a real feel-good story, very entertainingly told. It’s the “based on real events” story of writer-producer David McLean’s early years in the music business, looking at how he got started as a teenager, running a university disco just to impress a girl, getting his pal Scot, who made some cash on the “import export business” (drug dealing), and a local DJ, family-man John involved, to his run-ins with the local mob (yes, most of the venues in Dundee really were run by the McMafia back then and to put any kind of event on you had to go through them) and booking bands using just the phone box on the street corner and his self-belief. I don’t want to give too much detail away on the ups and downs of the story but there are things that go very right for them and things that go very, very wrong. There’s opportunities missed and chances taken, lots of laughs along the way and characters that you can’t help but root for.

Talking of characters, the acting across the board was top notch. There are no Hollywood “big names” in this film but I guarantee in a few years’ time they will be household names, especially Conor Berry who plays Davie and Sean Connor as his pal Scot. They played off each other so well that you could easily believe they were life-long friends and the supporting cast were just as good, all played by actors local to Dundee, and the accents and the use of dialect in the dialogue grounded the story in reality for me. The other thing that helped it feel real was that McLean himself was deeply involved in the making of the film as a writer and director so you know that, however far-fetched some of the serendipity may seem and how deep the scrapes are, what happens on screen is really what happened, at least as far as he is concerned.

There’s one more thing I have to mention – the look and the sound of the film. The cinematography is perfect, the colours and grittiness of Dundee of the time shine through, and soundtrack is AMAZING, filled with great songs from bands of the day that lift an already buoyant mood even higher. Both really encapsulated the era, the danger, the fun and excitement of being young and ambitious in Scotland at the time.

Is it a technically perfect film? No (but you wouldn’t expect the Caird Hall to change their signage just for one indie film) but small imperfections can be forgiven for the utter joy that the film has left me with. Schemers, like my memories of the city of Dundee, has my heart and my vote for favourite film of the festival this year.

Schemers will be available on DVD & Digital Download 25th January.