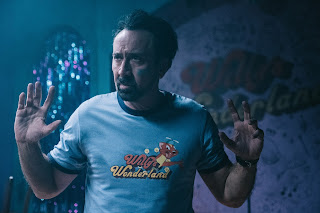 Say what you like about Nicolas Cage, his film choices are never boring. The trailer for his latest horror film Willy's Wonderland sees him battle with... giant robotic cuddly toys? ...

A quiet loner (Nic Cage) finds himself stranded in a remote town when his car breaks down. Unable to pay for the repairs he needs, he agrees to spend the night cleaning Willy’s Wonderland, an abandoned family fun centre. But this wonderland has a dark secret that the “The Janitor” is about to discover. He soon finds himself trapped inside Willy's and locked in an epic battle with the possessed animatronic mascots that roam the halls. To survive, he must fight his way through each of them.