Documentary - The Lady and the Dale 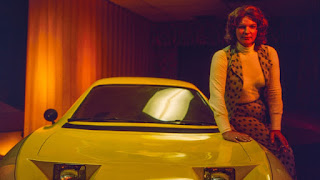 Four-part documentary series The Lady and The Dale heads to HBO at the end of the month. Find out more...
Press Release

HBO Documentary Films’ The Lady and The Dale from Emmy®-winning producers Mark and Jay Duplass (HBO’s Room 104) and directed by Nick Cammilleri and Zackary Drucker traces the audacious story of Elizabeth Carmichael, a larger-than-life entrepreneur who rose to prominence during the 1970s oil crisis with her promotion of a fuel-efficient, three-wheeled car known as The Dale. At a time when three big American automobile manufacturers ruled the road, Liz launched a futurist vehicle that promised to get 70 miles to the gallon.

Her promotional zeal thrust her into fierce public and media scrutiny which uncovered a web of mystery and suspicion about the car’s technology and her own chequered past. The Lady and The Dale is a probing exploration of family and identity seen through the lens of the rise and fall of a fearless and wily innovator, an extraordinarily resilient woman and a dedicated parent.

In 1974 in the midst of the Middle East oil crisis, a new, innovative automobile promised America high mileage and a low-price tag; its three-wheeled, slick design is a hopeful harbinger of things to come. Behind the development and promotion of The Dale, was Elizabeth Carmichael, who had previously lived a life of crime, on the run from authorities, and always cooked up preposterous mayhem. She claimed to have smuggled arms to Cuba during the revolution and was wanted by the FBI. With several ex-wives and children in her wake, she eventually wedded soulmate Vivian Barrett. They and their five children lived on the run from the law for many years with Liz starting her transition in 1966. As a woman in the 1970s, with her past kept hidden and a new identity as a widow with a business degree, Liz Carmichael founded the 20th Century Motor Car Company and made a name for herself in the male-dominated business world. A savvy marketer, Carmichael claimed that The Dale would be the biggest thing since the Model T and would challenge Detroit’s iron grip on the auto industry.

Interest in the Dale intensified, accelerated by Carmichael’s boasts of its efficiency and safety but also fueled by the company’s dubious business practices. With that spotlight came increased focus on Liz’s identity and gender. As media attention was heating up and frustrated investors clamouring at her door, Carmichael was arrested for fraud and business code violations before The Dale could even hit the streets.

The trial that followed was one of the longest in Los Angeles criminal court’s history and became as much about Carmichael’s transgender identity as it was about The Dale. Representing herself in the high-profile case, Carmichael challenged the prejudices of the time, but the surrounding media circus obfuscated the issues; Liz as a person was under interrogation as much as her business practices. The scrutiny into her life would continue for decades, even as she continually found surprising ways to outwit her pursuers, persist in her own survival and keep her family together.

The Lady and The Dale is a riveting, human portrait of an imperfect trans trailblazer, an industrious businesswoman and a beloved mother whose ambition and unwavering optimism ran headlong into widespread transphobia and media bias. Her life leaves a complicated legacy. Ahead of her time, forced to operate in an unaccommodating world, Liz Carmichael stands as a heroic reminder of the prejudices facing the trans community and as a symbol of untrammelled enterprise and survival.
The Lady and The Dale is directed by Nick Cammilleri and Zackary Drucker; executive producers, Mark Duplass, Jay Duplass, Mel Eslyn, Allen Bain, Andre Gaines, Nick Cammilleri, Alana Carithers, Zackary Drucker; producer, Madison Passarelli. For HBO: senior producer, Tina Nguyen; executive producers, Nancy Abraham and Lisa Heller.
The series debuts with two back-to-back episodes SUNDAY, JANUARY 31 (9:00-11:00 p.m. ET/PT), with new episodes airing subsequent Sundays at 9:00 p.m. ET/PT.

The Lady and The Dale will premiere on HBO and be available to stream on HBO Max.
Email ThisBlogThis!Share to TwitterShare to Facebook