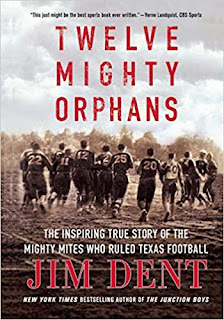 Sony Pictures Classics have acquired worldwide rights in all media to 12 Mighty Orphans, directed by Ty Roberts and adapted from Jim Dent’s bestselling book of the same name...
Press Release
12 Mighty Orphans tells the true story of the Mighty Mites, the football team of a Fort Worth orphanage who, during the Great Depression, went from playing without shoes—or even a football—to playing for the Texas state championships. The architect of their success was Rusty Russell, a legendary high school coach who shocked his colleagues by giving up his privileged position to teach and coach at the orphanage. Few knew Rusty's secret: that he himself was an orphan. Recognizing that his scrawny players couldn't beat the other teams with brawn, Rusty developed innovative strategies that would come to define modern football. Over the course of their winning season, these ultimate underdogs became an inspiration to their city, state, and entire nation.
With a screenplay written by Roberts, Lane Garrison and Kevin Meyer, the film stars Luke Wilson, Martin Sheen, Vinessa Shaw, Wayne Knight, Jake Austin Walker, Treat Williams, Ron White, Scott Haze, and Robert Duvall, marking Sheen and Duvall’s first onscreen reunion since Apocalypse Now.
"There is a reason underdog stories hold so much weight in the popular imagination, and we know the Mighty Mites’ true story of triumph over adversity—set in a time when much of the country was suffering—will lift the spirits of audiences worldwide. We are very excited to work with Ty on what promises to be an emotional and life-affirming film," said Sony Pictures Classics.

“It is an honor to be working with Sony Classics to bring this inspirational true story to the big screen,” added Roberts. “The story of Rusty and his underdog Orphans helped pull the country out of the Great Depression, and I know that it will be just as uplifting for audiences today."
The film is produced by Houston Hill and Roberts of Santa Rita Film Co., along with Michael De Luca and Angelique De Luca of Michael De Luca Productions. Producer Brinton Bryan of Greenbelt Films helped arrange the financing, along with The Forest Road Company who provided additional funding. George M. Young, Jr., J. Todd Harris, Rhett Bennett and Greg McCabe executive produced.