Films - Time: The God That Hums 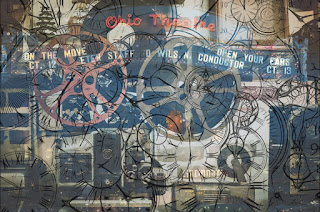 Nate McKenzie takes some time to consider time as portrayed in a few more recent films...

"Today, tomorrow, yesterday, it's all the same."

As our world is battened down in various stages of quarantine, I find myself considering time in the frame of a main character. A participant in my life, time has adapted to the role, instead of remaining an elusive flow of energy with direction that can't be controlled. Each day presents few new challenges as time has become less concerned with its influence over everything. Time, it seems, has become as lazy as the rest of us, in no hurry to get to the next destination. My new companion (I would never call time a friend) sits idly on the couch next to me, rhythmically spooning cereal into our slack jaws as we stare transfixed at the fourth wall and the fourth wall stares back. Each day is not an exact replica but similar to the last. Things could be worse, though, as we could be stuck in a temporal cycle we can't escape or vanished into a time where we don't belong. Either option feels familiar; solutions to the problem vary.


In the movie Palm Springs, Nyles (Andy Samberg) and Sarah (Cristin Milioti) are stuck in a time loop that resets to the morning of her sister's wedding day. For eons, this has been a contemptible scenario for those women who find themselves "always the bridesmaid, never the bride". Tenfold when the bride is your unanimously favored, and by all metrics perfect, younger sister. The Bridesmaid Dilemma, happy for your sibling, hate her for her perfection. Jealousy, family bonds, personal regret, etc., etc.

Eventually, Sarah finds a possible way to break the loop and Nyles is forced to decide if he wants to follow her or remain forever stagnant. The idea of a man being kicked in the ass towards change by a stronger, smarter woman is not a concept I'm unfamiliar with. Like the Bridesmaid Dilemma, the tale of 'guy who lost his dream girl because he refused to evolve' is one we've all heard before but Nyles lack of motivation is at least understandable. Being stuck in a time loop will have that effect. That doesn't negate the fact that he is at fault for accidentally dragging Sarah into the loop.

We've all been there.

There certainly are ways to escape the loop though many don't even try. Some create the loop themselves with drugs and booze and then blame everyone else for their inability to deviate. Drugs can be medicine but how many of us actually use them as prescribed? Don't kid yourself, you're not the exception. When tempting the fates, the truly unlucky find themselves stuck in a different time, past-present-future all the same.

Synchronic, the new film from Justin Benson and Aaron Moorhead depicts a designer drug that allows the user to transport across spacetime to an era in the past. In an old stand-up bit, Louis CK observes that time travel is "exclusively a white privilege". All eras are not created equal. As protagonist Steve (Anthony Mackie) searches for his best friend's daughter (who has been lost somewhen in time) he finds out quickly the dangers of playing with such unknowns when he gets stuck for a period in old-timey New Orleans and finds himself being chased by white colonialists. A daunting scenario, but merely a side note as an inoperable brain tumor is slowly winding down the days for Steve. His unseen struggle is no different than the internal battles suffered by those around him. We are all just trying to stave off death, sucking deep the marrow of life. You can only avoid the irrepressible ticking of the clock with chemicals for so long before you're either carried away or carted off; all rivers end in frothing tribute to the only god I know for sure to exist.

"The distinction between the past, present and future is only a stubbornly persistent illusion."

Is today... today? This all feels so familiar.

The trappings of revolving days often are the only indication of our self-made prisons. We attempt to pause the present and predict what is to come while our failure syncs up with the erratic, floundering pace of our success. The only guarantee is that trying to change the past will always, always result in days lost to disappointment.

Unless your life script is written by Christopher Nolan.

Tenet, a movie that seems to be about doing just that -changing the past- isn't a success story. Yes, The Protagonist saves the day. He is the hero needed in his time, but his future, one of further esteem, finds him becoming the author of his prologue. Not only is that hardly possible (a naïve aspiration for the most brazen of us) but also a trap lain and sprung by a predator who is his own prey. The ability to travel back and forth through time, even if your goal is to save every human life on the planet, is ultimately a selfish means to fame, reverence, worship. Altruism does not exist without complete self-sacrifice. Death is inevitable, to delay is not an act of heroism, it means you're afraid to accept that you are less than a god. And as I said, there is only one all-powerful: time, whose tune we all eventually hum.
Follow Nate on Twitter @Spudsmillennial
Image - various Pixabay
Email ThisBlogThis!Share to TwitterShare to Facebook