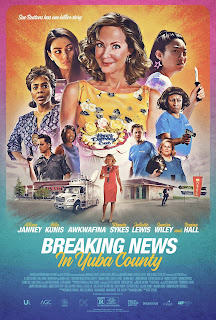 After her husband goes missing, Sue Buttons (Allison Janney), an underappreciated suburban wife, gets a taste of being a local celebrity as she embarks on a search to find him. She quickly finds herself in over her head, dodging cops, criminals and local reporters all aiming to uncover the truth. After being overlooked for so long, Sue goes to exaggerated lengths to prolong her “15 minutes of fame” and keep the truth from coming out.

Jake Gyllenhaal is among the producers for MGM's American International Pictures relaunch title which comes out on Digital on February 12th.
Image - AIP