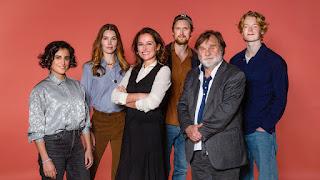 Additional cast has been announced for the new season of Danish drama series Borgen which returns to our screens next year, thanks to Netflix...

The new season of Borgen again follows Birgitte Nyborg (Sidse Babett Knudsen), her staff and the media tasked with covering her, this time in her role as Foreign Minister. The show will also follow Katrine Fønsmark’s (Birgitte Hjort Sørensen) journey. After being Birgitte’s head of press for a while, in the new season she is back in journalism where she has landed a job as head of the news department for a large, nationwide television station.
Sidse Babett Knudsen said “We’re finally getting started with Borgen again, and it's definitely about time. I have been looking forward to this moment so much that I feel like I am about to explode. I look forward to meeting all the new characters, people on both sides of the camera (and the desks) and to revisiting the ‘old ones’ from the first seasons. You should be careful with what you say, but I have sky-high expectations on this project. And most of all, I look forward to moving back into Birgitte Nyborg. What a privilege to be able to ride the carousel once again with this character that I love so much.”
Joining the new and exciting season of Borgen are the stars of Netflix’ successful Danish series The Rain; Mikkel Boe Følsgaard and Lucas Lynggaard Tønnesen.  Mikkel Boe Følsgaard said, “5-6 years ago, I lived in England for a period of time. When I told people over there that I was from Denmark, it wasn’t Michael Laudrup, Queen Margrethe nor Aqua they started to talk about; it was Borgen. Everyone had seen it. Everyone wanted to discuss it. Everyone praised it. I look forward to getting started with the production and to become a part of Borgen's universe. I am incredibly happy and proud to be able to carry on the legacy of one of the biggest Danish TV series, a series that has paved the way for the great success that Danish TV has had for many years, and which all of us in the film and TV industry now stand on the shoulders of.”
Also new to the cast are Özlem Saglanmak, Simon Bennebjerg, Johanne Louise Schmidt and Magnus Millang. Returning from the original cast are also Søren Malling (Torben Friis), Signe Egholm Olsen (Anne Sophie Lindenkrone), Mikael Birkkjær (Philip Christensen), Lisbeth Wulff (Pia Munk), Lars Mikkelsen (Søren Ravn), Laura Allen Müller Smith (Nadia Barazani), Jens Albinus (Jon Berthelsen), Lars Knutzon (Bent Sejrø), Peter Mygind (Michael Laugesen), Morten Kirkskov (Niels Erik Lund), Gitte Siem Christensen (Kirsten Sejrø), Angunnguaq Larsen (Jens Enok Berthelsen), Freja Riemann (Laura Nyborg Christensen) and Kasper Lange (Dan Vestergaard).

Borgen will be produced by SAM Productions, a Danish screenwriter-based production company, and is written by creator Adam Price (Borgen, Ragnarok), Emilie Lebech Kaae (Ragnarok, The Chestnut Man) and Maja Jul Larsen (Cry Wolf, Borgen), with Per Fly (Monica Z, Follow the Money) as the conceptual director. The executive producer is Meta Louise Foldager Sørensen (Antichrist, Melancholia, The Wife) and the producers are Stine Meldgaard Madsen (Ragnarok, Pros and Cons) and Michel Ryddeskov (Ragnarok).
The new Borgen will launch in 2022. All episodes will premiere on DR before becoming available on Netflix around the world.
Image & info - Netflix
Email ThisBlogThis!Share to TwitterShare to Facebook