Film - Deliver Us From Evil 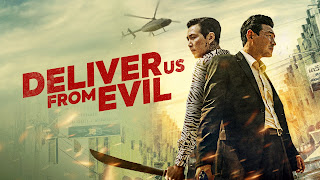 If we needed reminding that Korea leads the world when it comes to dark, violent action thrillers, Won-Chan Hong’s Deliver Us From Evil arrives on our screens this month providing a double-punch plot concerning a relentless pursuit, combined with a frantic search for a vulnerable child.

Kim In-nam (Hwang Jung-min) is a former black ops agent turned paid assassin with a remarkable set of skills. He has a rule however, which is only to kill the ‘bad guys’. His last job before his planned retirement to Panama is to eliminate a particularly nasty Yakuza crime boss in Tokyo.

However, once the deed is done the dead man’s psychopathically violent blood-brother Ray, (Lee Jung-jae) known as ‘the Butcher’, swears to track down In-nam and wreak a horrible revenge for the liquidation of his gangster brother.

To add to this, In-nam hears that his former girlfriend Young-joo (Choi Hee-seo) has been killed in Bangkok after she had been lured into making contact with the kidnappers of her nine-year-old daughter, Yoo-min.

In-nam journeys to Thailand to identify Young-joo’s body but also to find her missing daughter. His visit reveals a fact he was not aware of – the little girl he is out to rescue is his own child. He begins a desperate redemptive mission to find and save Yoo-min.

A cop friend of In-nam’s in Bangkok recruits Yui (Park Jung-min) a transgender woman, and pressures her into agreeing to help In-nam in by translating and searching through the city’s seedy underbelly for the child. In return Yui will receive the money to complete the transgendering operation.

However, a dogged and blood-thirsty Ray is on his trail. What starts as a rescue mission becomes a deadly game of cat and mouse as In-Nam the hunter also becomes the prey. Both men are utterly focused on their goals, and as they get closer to their targets, the body count rises. 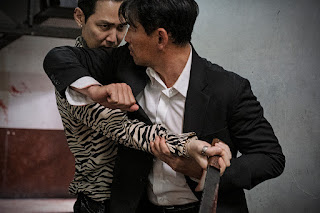 The twin storylines don’t undermine the film’s pace and focus. The theme of child kidnapping and organ trafficking adds horror, urgency and tension to the otherwise fairly conventional revenge-pursuit storyline.

The fight choreography in Deliver Us From Evil is as impressive as one might expect from an Asian movie in this genre. There are some spectacular car chases and shootouts in the crowded streets and a Bond-like rooftop chase, together with some slick close-quarters martial arts and gunplay. The decision to use slo-mo and freeze frame works well onscreen to emphasize the tension and add excitement.

The film spans three locations: Japan, Korea and Thailand, and uses four languages (Korean, Thai, English and Japanese) demonstrating the cosmopolitan reach of the criminal underworld. The dust and heat of Bangkok is well portrayed in its brightly lit yellow and orange hues while the scenes in Korea are dim, dark and melancholy. Shot mostly in greys and blues Japan exudes the cold, hard atmosphere of its gangster milieu.

Hwang Jun Min as the central character In-Nam makes for a compelling, impassive action hero. He is a superstar in his home country and it’s easy to see why - even in scenes of little dialogue he demands attention. He can deliver the action but also imbue his hardened assassin with emotion and tenderness. However, Jung-jae as Ray, ‘the Butcher’, almost steals the show as an outrageously murderous and relentless psychopath.

Park Jung-min as the transgender showgirl, Yui, provides a more humorous and humane contrast compared to the child traffickers and their casual disregard for human life. The actions of the criminals are so callous and unfeeling, and the child Yoo-min is such a sweet little girl that it’s inevitable we feel a guilty satisfaction when In-nam and Yui finally catch up with the criminals who snatch children.

In Deliver Us From Evil you have a slick, visceral, multi-layered action story that seeks to impress you visually and yet, as so often with South Korean movies, still manages to tug on your heart strings.