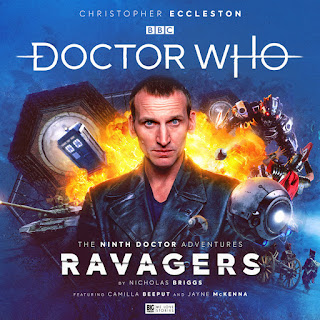 The cover artwork and story titles for the first volume of Big Finish Doctor Who – The Ninth Doctor Adventures starring Christopher Eccleston were unveiled over the weekend...

Joining Christopher Eccleston on his first audio odyssey through time and space are Camilla Beeput as Nova, a galley chef from the Sphere of Freedom enlisted by the Doctor to stop a dastardly plan, and Jayne McKenna as Audrey, the oldest gamer in Freedom City (although there may be more to her than meets the eye).

The stories included in this first volume are as follows:

Christopher Eccleston said; “It was lovely coming back to play the role again, due to Nicholas's writing. I was surprised at how very quickly I seemed to recall the choices I made fifteen years ago. It was an odd experience; the Ninth Doctor's still hanging around.”

Nicholas Briggs added: “It’s been an honour working with Chris again – it’s truly thrilling to hear him in studio, inhabiting the Ninth Doctor like he'd never been away! Writing and directing Doctor Who stories never gets old for me, and I’m so excited for people to hear what we’ve been up to.

“It's been a delight to kick off The Ninth Doctor Adventures series with Chris, and I know that my fellow writers and directors are cooking up some great stuff for the next box set.”

Doctor Who fans worldwide can now pre-order all four volumes of The Ninth Doctor Adventures, which are available in three formats – collector’s edition CD, digital download or limited edition gatefold triple LP vinyl – exclusively from the Big Finish website. Big Finish listeners can save by pre-ordering a bundle of the entire series for just £88 (as a collector’s edition box set) or £78 (as a download).

Doctor Who – The Ninth Doctor Adventures triple LP vinyls are strictly limited to a pressing of 1,000 per volume, and can be pre-ordered at £35.99 each, or £132 for the bundle of all four albums, again exclusively at the Big Finish website (www.bigfinish.com). Please note: the vinyl editions do not include any behind-the-scenes extras.

Please note that Big Finish is currently operating a digital-first release schedule. The mail-out of collector’s edition CDs and limited edition vinyl LPs may be delayed due to factors beyond our control, but all purchases of this release unlock a digital copy that can be immediately downloaded or played on the Big Finish app from the release date.
Images & info - Big Finish
Email ThisBlogThis!Share to TwitterShare to Facebook