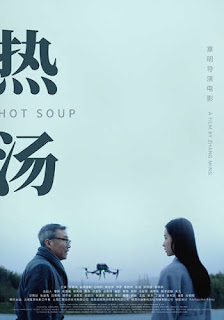 
This is a film that requires concentration, but it repays the effort.

It is the story of four separate women in Shanghai. There is Tang Tang (Liu Wenyi), she is married to an AI entrepreneur, Qi Youcang (Thomas Price). Their relationship is fraying over the subject of children.

Then there is a PhD student (Chen Duling) who is investigating happiness, with her Professor Jin Kaiyuan (Zhao Yanguozhangis). She comes to visit him every day at a Spa where he is undergoing treatment for painful arthritis. They are researching happiness and again they do not see eye-to-eye over the path that they are treading. The student seems to be in a rush, the Professor less so. They talk about what happiness is.

The third woman, played by Li Meng, is a passenger in a taxi whose driver, Chen Huo (Zuo Yi) is in love with her. They have numerous trips together throughout the film. The passenger wants to emigrate to the USA.

Finally, the fourth woman is the youngest. Played by Song Fangyuan, she is the daughter of a nightclub owner (Chen Shengli), who is in a wheelchair. The daughter has a boyfriend, who we never see and who disappears whenever he is about to be introduced to her father. Her father’s life was, previously, a little criminal perhaps.

So far, so straightforward.

Yet, as the film goes on the four women’s stories seems to merge into one. The PhD students research seems to involve the father of the younger woman or issues with Tang Tang and Qi Youcang, seem about having children link to the taxi passenger and the young woman. Objects introduced in one woman’s story pop up in another’s: a credit card, the data collection devices; an engagement ring; strange fruit and others. 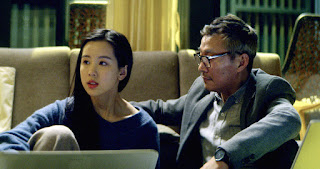 It starts to feel like a different story. Is this one woman’s story, from different times in her life? Is it a dream? If it is a dream, whose dream is it? I started to feel like I was watching a science-fiction film, probably based on a novel or short-story written by Philip K. Dick or something from the novels of Haruki Murakami. The four different actresses seem to be inhabiting one story and four stories at the same time.

The way it is done is so cleverly crafted too. The writers - Yuxi Gong, Qinyu Liu, Ming Wu, Ming Zhang – do a fantastic job of weaving everything together without spoon-feeding you. The longer the film goes on the more questions you have, and they are never really answered so you go on thinking about them afterward. It is an hour since I finished watching and I am still thinking about what was going on. This is a film that will hold up to multiple watches and still not necessarily answer your questions.

The film looks beautiful too, even in its most mundane locations. The director, Ming Zhang, has created something here that is the sort of film I adore, but the sort of film that I suspect would irritate the hell out of other people. It is almost impossible to pigeonhole. Each different segment feels like it might be a different film. The nightclub scenes make you think there might be a gangster film here, but there is not.

The acting is also superb. Not a dud performance among them. Chen Duling, Li Meng, Song Fangyuan and Liu Wenyi, who play the four women are fantastic. Zuo Yi, as the taxi driver, is also fabulous managing to convey so much in a look or a gesture.

I really liked this film, even as I tried to get my head around what was happening. I will watch this again at some point, if I can access it in the UK which is always an issue.

I almost want to watch it again now to see if I can solve it. I suspect if that sounds like a nightmare to you then this is not a film you will enjoy.