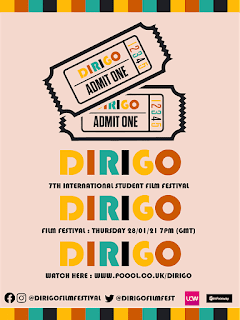 Want to find out what the next generation of film-makers is creating? Book your FREE online seat for the Dirigo International Student Film Festival which runs next week...

Directed and produced by FdA Film & Media Arts Production students from University Centre Weston, and now in its 7th year, the Dirigo Film Festival highlights the work of some of the best young film makers, not just in its local area of Weston Super Mare, but across the country and around the world. It is an open festival with no set boundaries, thereby actively encouraging new styles, voices and direction, and this means that there will be something for everyone in the short films on offer, and up for the Festival’s prestigious awards, this year.

In previous years, the festival took place at the Arnolfini and The Cube cinema, in Bristol, but this year, as with all the major film festivals, the decision was made to move the Dirigo festival online. Although that means this year’s film makers miss out on seeing their work on the big screen in a cinema setting, the great thing about this move online means that their work has the potential to be seen an even bigger audience than ever and the world is, indeed, theirs for the taking.

There are two different editions of Dirigo this year. The main Film Festival Programme will be streamed Live on FilmUCW Youtube channel on Thursday 28th January (7pm - 9pm) followed by the Festival awards ceremony alongside Q&A with festival directors and filmmakers on Zoom (from 9pm) and you can book your virtual cinema seat on Eventbrite now - Please register (Free) at Eventbrite

In addition, this year, Dirigo is also hosting a Schools edition of the festival on Friday 29th January 2021. This will be an edited version of the main Programme aimed at younger (under 16) audiences with a focus on the Young Film-makers Award. You can find out more and register for the Schools edition of Dirigo here .

By the way, in case you’re wondering about where the unusual name of the Festival came from, Jasmine Rider, who was one of the directors in its inaugural year, came up with it, picking up on dirigo as the Latin word that means “I direct”. [However, it’s appropriate that the Latin word also means I arrange or I distribute, depending on context, neatly encompassing the production side of the film-making business too – Ed].

Pass - directed by Elika Abdollahi
Give it Back! - directed by Ruchama Ehrenhalt
Distinct Properties of the Indonesian Spotted Tree Frog - directed by Brenden Lee Hickey ** WILL WIN [and this is the film of the Festival for me, not just because of the excellent title] **
Breaklines - directed by Matu Harvey, Trevor Cone


Best Animation – [note: any of these could win, they’re amazing]


Young Film-makers Award (given to Film Makers Under 18) -