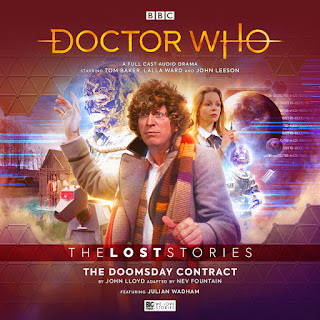 It could be the end of the world as we know it in The Doomsday Contract, the lost Fourth Doctor adventure, now brought to life and released next month on audio by Big Finish...

This full-cast audio drama features the original lead actors, with Tom Baker, Lalla Ward and John Leeson reprising their roles as the Doctor, Romana and K-9. It tells the story of how the Doctor must take the stand to save the Earth – once again...

At least that’s according to the legal documents. The Doctor, Romana and K9 find themselves at the centre of a most unusual trial.

An intergalactic corporation want to bulldoze the planet for a development project. Only a previous court’s preservation document is standing in their way. The Doctor has been summoned as an expert witness. If he can prove Earth contains intelligent life, the whole world will be saved.

But with a fortune at stake... it was never going to be that simple.
Here's the trailer for it, via the @bigfinish Twitter account:

SOUND ON! 🔊 👂 To catch up with your favourite "annoying space hippy" in the #DoctorWho: The Doomsday Contract trailer. Click here: https://t.co/SqR7oXJbLf to pre-order it NOW! pic.twitter.com/ou7GeLIs9K

Writer Nev Fountain said: “This has been ten years or so in the making, yet it suddenly seems to have appeared from nowhere – like the Improbability Drive in The Hitchhiker’s Guide to the Galaxy! – and I was very excited to adapt it. Tom Baker is the Doctor I watched most in my childhood. I hadn’t written for Tom before so this was really exciting.”

“John Lloyd is a genius, he’s a comedy god, and there’s all of his great stuff there. And Douglas Adams’s notes are there in the margins. You’re working with Douglas as a script editor on John’s work – that’s just as exciting as writing for Tom Baker, Lalla Ward and John Leeson! It works on both levels for me, as a writer and a fan.”

Of the script, Lalla Ward said: “It very much takes me back to the early days of Doctor Who. I think one of the great things about Doctor Who is that it can be so many things – the larky, funny version some of the time and then the deeply serious, techno stuff for people who like that too – I don’t think there are any limitations. And Tom is a force of nature who doesn’t stop where anyone else would, he is always incredible inventive and energetic.” 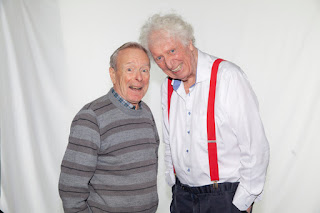 Tom Baker added: “The script is a very witty and comical sermon telling us ‘Excuse me, if you don’t think about certain things a little bit more, you’re heading for disaster!’ Underneath all the jokes (and some of them are very good!), there is a very, very serious nudge about being serious about survival.”

John Leeson said: “This was enormous fun. I never really know how things are going to turn out, but when you’re in the studios – when they’re voiced and you get the whole thing – it’s a different experience altogether. I greatly look forward to coming to do these sessions, I really do. Doctor Who is off the wall stuff, it’s amazing, great fun!”

Doctor Who – The Lost Stories: The Doomsday Contract is now available for pre-order as a collector’s edition 2-disc box set or download from just £12.99, exclusively at www.bigfinish.com.

Big Finish listeners can save money by pre-ordering a bundle of forthcoming adventures from The Lost Stories range, including both Return of the Cybermen and The Doomsday Contract, from just £25.

Big Finish is currently operating a digital-first release schedule. The mail-out of collector’s edition CDs may be delayed due to factors beyond our control, but all purchases of this release unlock a digital copy that can be immediately downloaded or played on the Big Finish app from the release date.