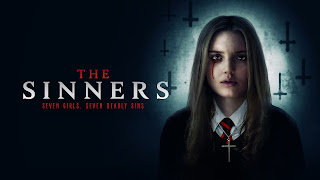 The incomparable Steve Taylor-Bryant watched The Sinners (also known at The Color Rose) thanks to Signature Entertainment...

I quite liked The Sinners, albeit for probably the reasons that some critics gave it a bit of kicking. Whilst it is not the best film I have ever seen, there are some elements to it that are intriguing, brave even, and with subject matter that was always going to lead to comparisons to some untouchable classics of yesteryear, I think the guys behind The Sinners fought hard and delivered relatively well.
And it is those untouchable classics which hang over The Sinners that other reviews and comments pick up on most, so let us start there. Yes, there is more than a little Heathers in this film, and yes, Heathers did lots of it so much better. The Sinners is not a film full of acerbic wit and nor is it a cutting thesis on high school life, but it has its moments. Whilst Heathers is deemed a stone cold classic now, I was there when it was released and did not do much money, I was there championing it on VHS, and I was there when it took about a decade to get the following it has now. Could The Sinners have that kind of cult (excuse the pun) following in a decade? Maybe, who am I to tell? On first watch though it is not as slick as Heathers, it is not as well cast as Heathers, yadda yadda, but nor was Heathers on first watch. The Sinners also suffers from having a group of girls together because whenever that happens you inevitably get Mean Girls comparisons and here, I cannot fight The Sinners corner. It is not as good as Mean Girls at all, but it's not supposed to be. Mean Girls had the cliques, but The Sinners brings the occult and a damning view of life in a small, highly religious town and that is where the interest is for me in The Sinners as that is not a life I know well.

The filming locations are stunning, gorgeous mountains, thick woods, all the background you need to set a mood and pliable enough to spark any atmosphere at just a glance and, when you mix in a high level of religion, the divine creation atmosphere from the location and the story can be as unnerving as I am sure the filmmakers wanted it to be. The main seven girls, each taking on a sin as a personality trait is an interesting concept and not one that has ever been executed well. Whilst it does not land in The Sinners it is as close to great as the concept has gotten and I think if writer/director (and briefly star?) Courtney Paige had picked just one or two elements of storytelling here instead of the kitchen sink approach it could have stunning. The religious fervour of small-town America is strong enough that any opposition to it would be interesting to watch, and watching seven deadly sinners go at middle America's heartbeat could have been epic. But then you drop in the cult bit, the teen horror tropes, the massively overused voiceover, and you start to drift away from the epic and into the territory of normal. The viewer is not shocked by anything now because you have used slow motion/ sped up/ voiceover/ quiet all too much and diluted the spark of interest we had the beginning. What The Sinners suffers from is "too much" and maybe a more deft or experienced hand in control could have produced something stunning. However, for a directorial debut, and to write much of it, and to balance all that with a successful acting career, Courtney Paige deserves some credit.
The Sinners is not as good or as interesting as deep down I know it could have been but its comparisons to more famous titles are unfair. It is still worth a watch.