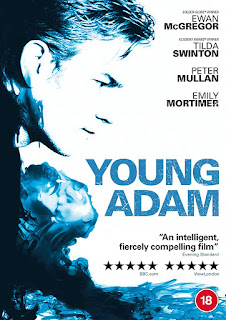 With the film getting a DVD re-release next week thanks to Kaleidoscope Home Entertainment, watch the trailer for Young Adam...

Set in 1950's Scotland, Ewan McGregor stars as Joe, a young drifter who finds work on a river barge owned by the down-to-earth Les and his enigmatic wife Ella. One afternoon Joe and Les happen upon the corpse of a young woman floating in the water. Accident? Suicide? Murder? As the police investigate the case and a suspect is arrested, Joe embarks on a secret, lustful affair with his employer’s wife, all the while hiding the fact that he knows more about the dead woman than he admits.
First released in 2003 and directed by David Mackenzie, Young Adam is a resonant, haunting and steamy drama based on the novel by Glasgow author Alexander Trocchi. The film stars Ewan McGregor, Tilda Swinton, Emily Mortimer and Peter Mullan, with a soundtrack by David Byrne.
Image - Amazon
Email ThisBlogThis!Share to TwitterShare to Facebook