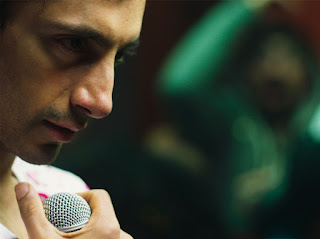 The BFI streaming platform BFI Player’s Subscription Exclusives will become even more tempting from today as the award-winning Mogul Mowgli becomes the newest and most high profile offer yet....
Press Release
Not only will the film become available, but subscribers can also discover and watch the favourite films that inspired and influenced Bassam Tariq and Riz Ahmed in the making of Mogul Mowgli. The film collection that they put together, Near the Jugular, including La Haine (1995), Tokyo Story (1953) and Bong Joon-ho’s Mother (2009) is on BFI Player Subscription now.
After becoming one of the hits of the BFI London Film Festival, Mogul Mowgli opened in cinemas on 30 October 2020, but had to swiftly pivot to digital platforms on 6 November (BFI Player and Curzon Home Cinema) with the closure of cinemas in the UK due to the pandemic. It has enjoyed great success as a premium video on demand title (PVOD), appearing in the BFI Player Top 10 most popular rentals every week since release, breaking all previous records.

Mogul Mowgli follows British Pakistani rapper Zed (Riz Ahmed) is a rising star on the cusp of his first world tour. But, struck down by an illness that threatens to derail his big break, he’s forced to confront his past, his family and the uncertainty of his legacy. Mogul Mowgli also features Alyy Khan, Sudha Bhuchar, Nabhaan Rizwan, Anjana Vasan and Aiysha Hart. The film is a Pulse Films & Left Handed production and produced in association with Silvertown Films, backed by BBC Film, Cinereach, SFFILM, Vice Studios and Ryot Films. The producers are Thomas Benksi for Pulse Films, Bennett McGhee, Riz Ahmed, Michael Peay and the co-producer is Joanne Dixon. Eva Yates is Executive Producer for BBC Film.

A subscription to BFI Player begins with a free trial for 14 days and then it’s just £4.99 a month or £49 a year – cancel at any time. Therefore new subscribers could watch Mogul Mowgli during a free trial period.
[Read Steve's review of the film HERE to see why you would want to - Ed]

The feature films in Subscription Exclusives – a rapidly evolving recent offer in the Subscription section of BFI Player – are not available on any other platform as part of a subscription package. Other films currently on offer on this exclusive basis include La Haine, Adoration, La Belle Époque, A White, White Day, System Crasher, Lucky Grandma, Little Joe and End Of The Century. The total number of films available to watch with a BFI Player subscription, from contemporary, to classic and cult is now around 500; with many of them highlighted within Collections to help guide film fans through this incredible offer for home viewing.

Film fans can sign up to a BFI Player subscription with a 14-day free trial here: https://player.bfi.org.uk/subscribe

Find all the other Subscription Exclusives here: https://player.bfi.org.uk/subscription/collection/subscription-exclusives

The Near the Jugular Subscription collection is here: https://player.bfi.org.uk/subscription/collection/near-the-jugular