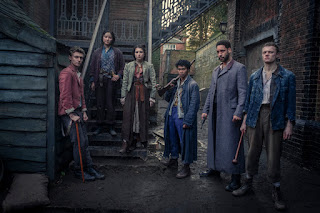 What if Sherlock Holmes had a bunch of magical teen sidekicks? Putting a supernatural twist on stories from 221b Baker Street, watch the trailer for The Irregulars, coming to Netflix next month...

Set in Victorian London, the series follows a gang of troubled street teens who are manipulated into solving crimes for the sinister Doctor Watson and his mysterious business partner, the elusive Sherlock Holmes. As the crimes take on a horrifying supernatural edge and a dark power emerges, it'll be up to the Irregulars to come together to save not only London but the entire world.

Created by Tom Bidwell, with Endeavour's Johnny Allan as lead director for the series, the ensemble cast includes Thaddea Graham as Bea, Darci Shaw as Jessie, Jojo Macari as Billy, Mckell David) as Spike and Harrison Osterfield as Leopold. Of course, Mr Holmes is going to make an appearance, played by Henry Lloyd-Hughes, joined by Royce Pierreson as John Watson.