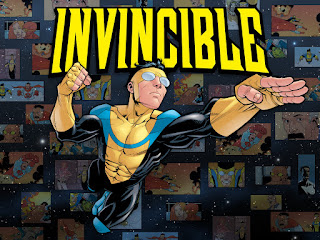 Already being billed as "The Boys meets The Walking Dead", watch the trailer for Invincible, an animated superhero TV series with a stellar cast, set to premiere on Amazon Prime next month...
From The Walking Dead creator Robert Kirkman, Invincible is an adult animated superhero show that revolves around seventeen-year-old Mark Grayson who is just like every other guy his age - except his father is the most powerful superhero on the planet, Omni-Man; but as Mark develops powers of his own, he discovers his father's legacy may not be as heroic as it seems.
Developed from the 15 year long run of Invincible comics created by Kirkman with Ryan Ottley and Cory Walker, the show will star the voices of Steven Yuen (The Walking Dead) as Mark Grayson with J K Simmons (everything) as his father Nolan/Omni-Man. You may think that's already pretty cool [do we still say "cool"? - Ed] but that is just the start of a star-studded cast, with the following also confirmed to lend their voices:

I know, right?!
The first 3 episodes will drop on Amazon Prime on 26th March with the rest of the series coming at one episode a week after that.
Here's the trailer (and remember it's definitely not for kids)
Image - Amazon
Email ThisBlogThis!Share to TwitterShare to Facebook