Audio - Doctor Who: Something Inside 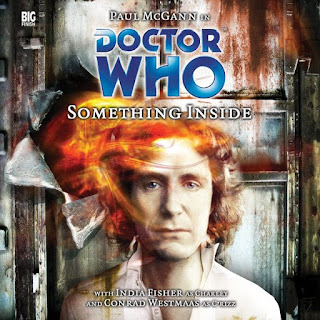 Our Doctor Who audio expert, Tony Cross, delves into the back catalogue available from the Big Finish website. Today is the Eighth Doctor and Charley adventure Something Inside...

This is another fine piece of Doctor Who from Big Finish. Written by Trevor Baxendale it is a dark tale of experimentation, imprisonment, torture and unintended consequences. Not everyone survives.

This is also my favourite Paul McGann performance as the 8th Doctor. Truth be told he's been pretty good throughout but there's something about this story that brings out the best in him. Baxendale's writing seems to hit a sympathetic vibration with McGann's performance and how he sees the Doctor. Even when The Doctor is struggling to find his memories whilst being 'questioned' there's an extra bit of va voom and later when The Doctor is riffing off how clever he is or when he's explaining extra-time to C'rizz or right at the end where he says, "I've had better days" there is a real rightness about this performance. This feels like the 8th Doctor discovered. It's quite exciting.

'Something Inside' has other excellent performances too. One of Doctor Who's common problems, in whatever format, is that by its nature a Doctor Who story sees a lot of people die. A lot of the time they're identikit soldiers, henchmen or members of the public. Sometimes they get names and lines. Sometimes those names and lines combine to create memorable people. People whose deaths matter and whose loses make you feel genuinely sad or even angry. Griffith's death in 'Attack of the Cybermen' is one of those. I was - and still am - really pissed off that they killed him off. 'Something Inside' has those type of characters.

The main supporting cast - at least the non-villainous part - are those kinds of characters: Jane Thirgood (Louise Collins), Tessa Waylund (Liz Crowther), Gordon Latch (John Killoran). All looking for a way out and all doomed not to find one. It's the combination of the writing and the acting that makes you care about these people and the gradual, creeping realisation that death might be the fate of all of them. Death is a constant presence in the Doctor Who universe but because of the programme's history and target audience it doesn't always feel like death hurts: physically and emotionally. In 'Something Inside' it does.

The final ingredient that makes me like this so much is Garth Twist (Ian Brooker) and Eryk Rawden (Stephen Elder). The two initial villains of the piece and arguably two of the nastiest villains in Doctor Who. Twist is a torturer and Rawden the military scientist who has let things get a little bit out of hand. He is a Doctor Who archetype: the scientist blinded to conscience and focused on his work. The supreme example, of course, is Davros. Rawden might well have gone along with Davros if asked the virus question by the Fourth Doctor. They really are nasty pieces of work and the performances by both actors are excellent, but Stephen Elder's is magnificent, especially as Rawden's best laid plans start to fray at the edges. It's nice to see genuine terror in a villain as....well. let's not spoil it all.

Add the usual excellent supporting work from India Fisher and Conrad Westmaas and you've got a rather good little story on your hands.