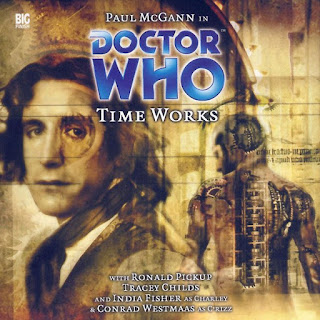 Our Doctor Who audio expert, Tony Cross, delves into the back catalogue available from the Big Finish website. Today is the Eighth Doctor and Charley adventure Time Works...

You know I think this might be - just might - my favourite 8th Doctor Big Finish story so far. It is a wonderfully well told tale that not only demonstrates the Doctor's ability to bring down an unjust government in rapid order. It has a fine satirical touch too with its talk of efficiency and effectiveness, of 'completion' and 'cut backs'. It also has entertaining things to say about free will and the courage required to rebel. There's also a little about love too.

The Doctor, Charley and C'rizz have landed on a mysterious planet where time seems to have 'set like amber'. People are frozen in the middle of their daily grind, which initially makes the Doctor wonder whether they have jumped a time track a la 'The Space Museum'. With his usual nose for the curious The Doctor explores further until coming across a woman frozen in her flight from the militia. She is carrying an object which causes the Doctor alarm. He insists everyone makes for the TARDIS immediately but just as they are about to enter it The Doctor disappear, jumping backwards in time to before the time freeze they have just witnessed.

Time Works then becomes two parallel stories as Charley and C'rizz try to find and then help the Doctor whilst Paul McGann's Doctor embarks on his most Doctor-ish adventure so far. Flexing his interference muscles as he charms his way into the - apparent - centre of power and proceeds to stick a spanner in the clock works.

The mysteries and history of the planet are gradually explained in a nice subtle way so that nothing ever feels like info-dumping. Different voices tell their tales and we find out more about the most sinister of the planet's problems: The Clockwork Men.

It is The Clockwork Men who do the dirtiest of the dirty work. Removing the time wasters and cut backs in the invisible moment between the tick and the tock. It's a particularly unpleasant form of that favourite tool of dictatorships the world over: the disappearance. But instead of the fearful knock of the secret police on the door these things remove their victims without being seen. The existence is talked of, but they are the most invisible and effective of secret policemen. It's a cruel cherry on a particularly impressive dictator's cake.

This planet is the tyranny of Frederick Winslow Taylor, the founder - inventor perhaps - of time and motion studies. This place is extremist wing of Taylorism, efficiency as terrorism.

The Doctor however is on the case and this clockwork smooth society is about to get a shock as he, in his own words, brings down an unjust society in two and a half hours.". This is an excellent Paul McGann performance as he gets to shake of some of the shadows and baggage and just be the Doctor doing what he does best: causing chaos and changing regimes.

The cast are excellent. Ronald Pickup gives voice to the weary Kestorian, the King. The Doctor mentions he's the oldest person that they've seen, and he's been trying to keep everything together for the sake of his people whilst expecting to be 'cut back' and replaced by his coldly cynical son Zanith (Adrian Schiller). The relationship between the two is played out brilliantly. It is, once again, a believable relationship.

The Doctor is aided by Vannet (Beth Vyse), a market trader whose husband Collis was 'cut back'. By sheer coincidence Collis ends up - unwillingly at first - helping C'rizz and Charley with their end of the story. It's a perfect example of one of those questioning and protesting characters that the Doctor and his friends catalyse into action. The Doctor lights the blue touch paper.

Vannet's brother Revnon (played with conviction by Merryn Owen ) is an almost Judas. A realistic portrayal of how most of us would probably behave if we found ourselves in these circumstances: head down and getting on with the job. Worried about his sister's dangerous lifestyle and trying to protect her without betraying himself. Revnon is us perhaps. The average, ordinary Joe.

In the end this is Paul McGann at his finest aided and abetted by sterling work from India Fisher and Conrad Westmaas. Charley and C'rizz really rise to the occasion here. Ignoring the Doctor's advice and generally doing a fine job of teasing out the plot and the background to this story without making it feel like we're being force fed.

So bravo Big Finish. I can't recommend this highly enough.