Audio - Doctor Who: Other Lives 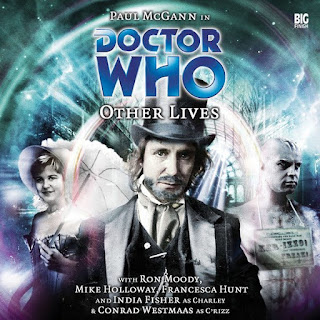 Our Doctor Who audio expert, Tony Cross, delves into the back catalogue available from the Big Finish website. Today is the Eighth Doctor and Charley adventure Other Lives...

'Other Lives' is a reasonably light-hearted tale set around the Great Exhibition of 1851. It isn't without its emotional undercurrents, especially in the Doctor's relationship with Georgina Marlowe (Francesca Hunt) and there's a little darkness via C'rizz's exposure to Joseph Crackles (Mike Holloway) and his freak show and C'rizz's vengeance on Crackles.

There's also a nod to realities of Victorian England with talk of revolution and Charley's run in with the Dickensian named Rufus Dimplesqueeze.

But fundamentally this is just a romp. Everyone gets separated and involved in 'Other Lives'. Charley gets friendly with the Duke of Wellington who is desperately trying to cover up the sudden disappearance of the de Roche's, French diplomats who stumbled into the TARDIS. Coincidentally it turns out that the De Roche's bare a remarkable resemblance to Charley and C'rizz (although the latter requires a wig and some make-up). All of that might seem rather confusing. Forgive me if it lacks clarity. It's like trying to explain one of Shakespeare's cross-dressing comedies without getting twisted and lost.

The Doctor gets arrested, mistaken for an assassin - Griswold - who is out to kill the De Roches and then released when Georgina Marlowe claims he is her husband. The Doctor gets dragged into Georgina's attempts to save her home from a rather grumpy Uncle of her husbands (the said Mr. Dimplesqueeze by coincidence). And it is nice to hear the Doctor go through a period of quiet domestication without too much emotional trauma, although there is a little. Francesca Hunt does a lovely job breathing life into Georgina who is trying to keep her emotions in desperate check. (Francesca is India Fisher's step-sister apparently and they do have a certain similarity of voice).

India Fisher is brilliant in this story. One of my favourite Charley stories, I think. Her friendliness with the Duke of Wellington, her reaction when she realises that Dimplesqueeze thinks she is a lady of ill-repute, her dismissal of the Duke's rather pompous aide de camp (for want of a better phrase) Mr. Fazackerly. It's a great performance. She also plays Madam de Roche (as Conrad Westmaas does M. de Roche and Paul McGann does Edward - Georgina's actual husband), which is a rather nice touch.

Matching India Fisher for brilliance though is Ron Moody as The Duke of Wellington. I think he's a little gentler than the real Duke. (The real Duke is part of one of the most terrible, but characteristically Victorian stories I have ever heard. I may tell it one day.) However, Moody's performance does feel 'right' in its own way and his comic timing is rather delicious.

So a light comedy with dark edges then. Certainly Mr. Crackle's fate at the hands of C'rizz is rather unpleasant but everyone else - apart from Griswold we assume who is heading for prison, if not the gallows - gets a happy ending.

Which once more is a dangerous word to use. It is damning by faint praise again. There isn't much really at stake in this story, even if C'rizz doesn't have the best time of it (to put it mildly). This feels like a holiday story in comparison with the usual heavy stuff that goes down in the Eighth Doctor's world and its all the better for it.

A breath of fresh air.

I did laugh out loud a few times, which isn't that normal when listening to Big Finish. So, if you want to be introduced to the Eighth Doctor without the baggage then this - and Invaders From Mars - would be the story I'd pick up, No real continuity, no piece in a huge story arc just a fun historical adventure.