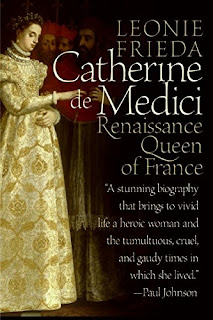 Starz has announced that it has greenlit a new limited series, The Serpent Queen, based on the book Catherine de Medici: Renaissance Queen of France from author Leonie Frieda...
Press Release
Considered an immigrant, common and plain, Catherine de Medici is married into the 16th century French court as an orphaned teenager expected to bring a fortune in dowry and produce many heirs, only to discover that her husband is in love with an older woman, her dowry is unpaid and she’s unable to conceive. Yet, only with her intelligence and determination, she manages to keep her marriage alive and masters the blood-sport that is the monarchy better than anyone else, ruling France for 50 years.
“The Serpent Queen may be the most cunning account of one of the most influential women ever to wear a crown that Starz has told,” said Christina Davis, President of Original Programming for Starz. “We are thrilled to be working with such an incredibly talented team who will give this series a modern voice among a sensational historical backdrop.”

Based on thousands of private letters, Catherine de Medici: Renaissance Queen of France from author Leonie Frieda was a bestseller on both sides of the Atlantic and was translated into eight languages. The screenplay for the series will be written by Justin Haythe, who also executive produces alongside Francis Lawrence and Erwin Stoff.
“Writing Catherine and her story has been truly exciting as she is a very complex leading character who becomes a skilled ruler, battling extraordinary political and personal odds throughout her reign,” said Haythe. “She is a Queen who defies convention, as she relies upon her intellect, her unusual entourage and a ready supply of black magic inspiring, centuries later, the Evil Queen of fairy tales.”

From screenwriting to short stories and novels, Justin Haythe has penned remarkable works that have earned him praise and accolades in both cinema and literature. Movie-buffs know him best for his BAFTA Award nominated screenplay of the romantic drama Revolutionary Road, while the literary world is well familiar with Haythe's debut novel The Honeymoon, which was longlisted for the 2004 Man Booker Prize. Other significant screenwriting credits include the crime drama Snitch, the western action film The Lone Ranger, the spy thriller Red Sparrow and the biographical drama Bohemian Rhapsody.
Stacie Passon is set to direct multiple episodes in the series, including the premiere episode. She is an American director, writer and producer who most recently executive produced and directed all episodes of the limited series Little Birds based on the short story by Anais Nin for ITV/SKY in the UK. Her debut film Concussion premiered at the Sundance Film Festival, and subsequently won a Teddy Award Jury Prize as an outstanding film about LGBT themes at the Berlin International Film Festival. Passon also received a Film Independent Spirit Award nomination for Best First Feature. Her second feature We Have Always Lived In the Castle is an adaptation of Shirley Jackson’s acclaimed novel.
The eight-episode series is produced for Starz by Lionsgate Television and 3 Arts Entertainment.
Image - Amazon
Email ThisBlogThis!Share to TwitterShare to Facebook