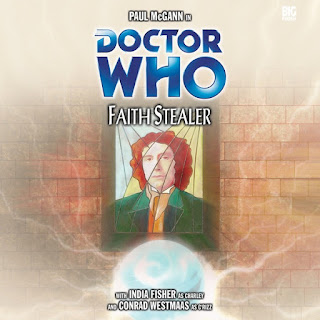 Our Doctor Who audio expert, Tony Cross, delves into the back catalogue available from the Big Finish website. Today is the Eighth Doctor and Charley adventure Faith Stealer...

So after yesterday I managed to come down with a bug in the early hours of the morning. This meant a lack of sleep, a miserable morning and a surfeit of grumpiness and self-pity. Most of Faith Stealer was listened to whilst lying in bed feeling sorry for myself.

None of that you need to know really but perhaps a little context helps.

Anyway this was quite a pleasant experience. It was a little lighter than more recent stories and had some genuinely funny moments. The best of which was probably all the interaction with the Church of Serendipity and Jebdal's Monty Python-esque 'following leaders' moment.

I would quibble a little with another villain that gets inside people's minds. There's so many of them in this run of Big Finish stories that it is beginning to feel like Jon Pertwee Season 8 when the villain constantly turned out to be The Master until his arrival was almost routine. Oh, so this one is a binarity anomaly quartz, but it mainly works by getting inside people's minds. Hmmm. Can't we just have something big, hairy and heavily armed for a change? Something that does bad things through the physical violence and painful death?

The story is set in Multihaven, which is a kind of car boot sale for faith. Here different religions mingle. No one faith can dominate. Except onto the scene has arrived Laan Carder (Christian Rodska) and the 23rd Church of Lucidity. You can clearly see Laan Carder's up to no good because he and his coverts get an Invisible Enemy style catchphrase: "So much lucidity" but The Bordinan (Tessa Shaw) who oversees Multihaven thinks it is just another passing religious fad. She's seen it all before.

Into these stumbles the Doctor, Charley and K'rizz in traditional Doctor Who stylee. K'rizz is unable to shake off the L'Da's death and keeps dreaming of the moment it happened and The Kro'ka suggests Multihaven might sort him out. A suggestion that seems a little over-helpful from a being we've come to be suspicious of.

K'rizz gets zonked by the Lucidian's. Then he gets mind probed by Director Garfolt (Neil Bett) who is the latest in a long line of scientific types that would have been better off listening to the Doctor's instructions.

It's nice to have a story where the TARDIS crew’s existential crises are kept to a minimum for a change. There’re almost no bickering or emotional spasms. It feels like a normal Doctor Who story, which is something of a relief.

The regulars do their usual excellent job and McGann's Doctor is starting to sound more Doctor-ish again after his recent adjustment to a new Universe. He's still looking for the TARDIS, which disappeared all the way back in Scherzo (perhaps I should have mentioned that...[cough])

There's some good acting from the supporting cast, especially Rodska as Laan Carder. I also liked Helen Kirkpatrick's Jebdal, who does a fine line in faith and doubt. It's always nice when a character realises, they've been had and tries to do something about it.

This was the ideal story for my state of mind today: not too deep, not too dark plus a dash of wit and humour.