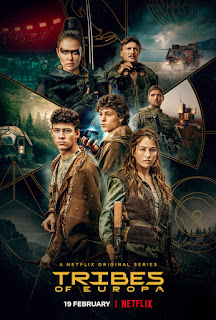 The German original series Tribes of Europa starts on Netflix on February 19th. Watch the trailer...

2074. In the wake of a mysterious global disaster, war rages between the Tribes that have emerged from the wreckage of Europe. Three siblings from the peaceful Origine tribe - Kiano (Emilio Sakraya), Liv (Henriette Confurius) and Elja (David Ali Rashed) - are separated and forced to forge their own paths in an action-packed fight for the future of this new Europa.
In Tribes of Europa three siblings’ adventures begin in a futuristic Europe that has gone through a mysterious catastrophe.
“In December 2029, technology suddenly started going crazy. Bam! Lights out and darkness. That was it. The Middle Ages.” (Moses, salvager and loner, played by Oliver Masucci).
45 Years later, Europe is split into microstates and people live in tribes.
“Now the Tribes are ruling the continent, Europa.” (Lord Varvara from the Crows, played by Melika Foroutan).

At the heart of the action there are the three siblings Liv, Kiano and Elja from the peaceful tribe of the Origines, who get separated during an attack.
“We thought we could live in peace forever. But we were wrong. My family is somewhere out there. I’d do anything to get my family back.” (Liv, played by Henriette Confurius)
Left on their own devices, they are united mainly by the fight for survival and the irrepressible will to reunite their family:
“No matter what, we’ll always stay together!” (Kiano, played by Emilio Sakraya).

Three siblings, three destinations and their common hope for a united life in freedom:
“A big threat is coming to Europa. We have to stop it!” (Elja, played by Ali Rashed).
They overcome their fears, are brave and eventually have to accept that...
“sometimes, it takes an outrageous deed to steer history back on the right track.” (David Voss from the Crimson Republic, played by Robert Finster).

Showrunner and creator Philip Koch said, “Tribes of Europa” is a tribute to the science fiction genre. The show depicts an exciting world that gets back on its feet and, in the end, a hopeful new beginning for the continent.”
Emilio Sakraya, Henriette Confurius, David Ali Rashed, Oliver Masucci, Robert Finster, and Ana Ularu are starring. The visually stunning sci-fi-fantasy adventure was produced by Dark producers Quirin Berg and Max Wiedemann as well as Maximilian Vetter from W&B Television.
Email ThisBlogThis!Share to TwitterShare to Facebook