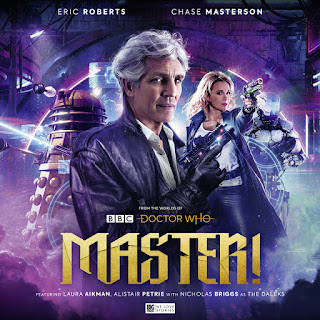 Eric Roberts takes centre stage as his incarnation of the Master returns in MASTER!, out now from Big Finish. Watch the new trailer...

Press Release
More than two decades on from his clash with Paul McGann’s Eighth Doctor, these three brand-new full-cast audio dramas take the Master out of the Vortex, through the backstreets of London and right into a deadly showdown with the Daleks...

Abandoned in the Vortex, the Master’s lost incarnation is about to be thrown a lifeline.

Earth rebuilds in the aftermath of invasion, and power rests with those who innovate. Genius Lila Kreeg makes a deal with the devil to see her dreams fulfilled.

As the Master returns, there are those – like Vienna Salvatori – who wish to hunt him, and those upon whom he wishes vengeance himself...
Eric Roberts said: “What appeals to me about the role of the Master are the endless layers. The only other role it really can be compared to is the Joker – from Batman to The Dark Knight to Joker. Also, the magic of roles like this is that the character affects each listener differently, and yet bonds people together in their shared fascination.

“My wife, Eliza, and I, and the kids, display our box set with great joy and pride. Doing so has shown us how wide the fan base is for Doctor Who and the Master as a character. Everyone who comes into the house reacts to it. It’s fantastic.”

Producer David Richardson added: “The series actually has a very distinct tone. It feels quite ‘Philip K Dick’ to me – a brilliantly imagined future with a lot of detailed world building. It’s very people-based, and central to the whole thing is the character Lila Kreeg, played brilliantly by Laura Aikman. Lila is really the heart, soul and tragedy of the piece – the human scientist who ends up in the Master’s thrall.”

MASTER! is now available as a collector’s edition three-disc box set (on CD at £19.99) and as a digital download (at £16.99), exclusively from www.bigfinish.com.

Big Finish is currently operating a digital-first release schedule. The mail-out of collector’s edition CDs may be delayed due to factors beyond our control, but all purchases of this release unlock a digital copy that can be immediately downloaded or played on the Big Finish app from the release date.
Image & info - Big Finish
Email ThisBlogThis!Share to TwitterShare to Facebook