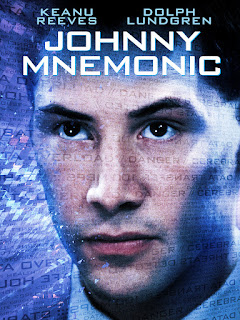 To celebrate its 25th anniversary, the groundbreaking Keanu Reeves sci-fi Johnny Mnemonic is getting a brand new HD release on May 10th, from Vertigo Releasing...

“Everybody and his mother wants to kill me!”

In the 21st century the information superhighway has developed so far that cyberspace is the norm for all business and personal dealings. Information has become so important that to shield the most delicate files from cyberspace hackers, the data is transported in the heads of Mnemonic couriers. Johnny (Keanu Reeves) is the best of the bunch, but this time the raw data he carries is so sensitive that he is being pursued by many interested parties, and his failure to deliver the information will hand him the ultimate lateness penalty.

Hollywood action superstar Keanu Reeves stars in this ahead-of-its time sci-fi thriller set in 2021(!); it predicted the use of the internet, and paved the way for mind-bending blockbusters such as The Matrix and Inception. Reeves plays a futuristic data carrier with a gobsmacking 80GB storage capacity in his brain!! An all-star cast includes Dolph Lundgren (The Expendables), Udo Kier (Blade), Henry Rollins (Lost Highway), Takeshi Kitano (Violent Cop) and Ice-T (New Jack City). Johnny Mnemonic was also the first film adaptation of the work of legendary cyberpunk pioneer William Gibson.

Packed with slam-bang action, dazzling visuals, and wild, prophetic technical innovations, and with a pulsing score by Brad Fiedel (The Terminator), it’s a hugely enjoyable, unforgettable slice of 90s sci-fi cinema that bridged the gap between Bladerunner and Christopher Nolan.