Comicbook - The Nerds Who Haunted Themselves 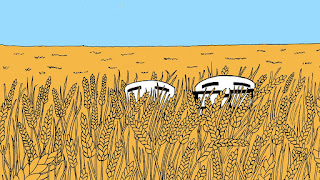 You don't have much time left if you want to get your hands on Stuart Mulrain's "outstanding" comic-strip collection, crowdfunding until Wednesday 17th on Kickstarter...

As you probably have already gathered, we [well, some of "we" - Ed] are pretty partial to the odd pun here at The DreamCage, so the mere title of the book, The Nerds Who Haunted Themselves: Outstanding In Their Field immediately caught our eye. Add to this that Stuart Mulrain is an occasional writer for us AND that some of the money raised from the sale of this comic-strip collection is going towards keeping our favourite Comic Festival, True Believers, going into the post-Covid era and we felt this was something we had to support.

The Nerds Who Haunted Themselves: Outstanding In Their Field is a collection of 1, 2 and 4-panel comic-strips drawn by Stuart Mulrain himself and began life as a series of drawings he did as part of his A Drawing A Day 2020 project (in which he did a drawing each day for the 366 days of 2020). These were subsequently gathered together - with a couple of extra strips - and put up on ComicHaus as a digital collection, where it has been very successful. Now, the 17 strips that were previously available in the ComicHaus version have been collated into a delightfully square [It's hip to be square - Ed] paperback book, along with 20 new pages of strips, added exclusively for this collection.

Here's just a couple of the inside pages to give you a flavour of the great art and bad puns on offer. 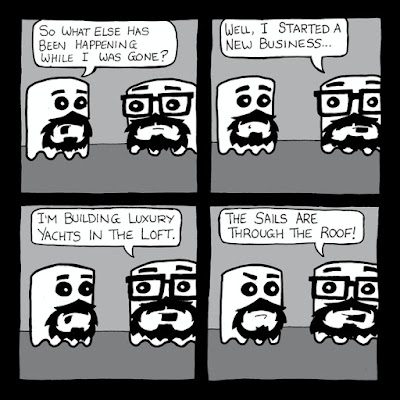 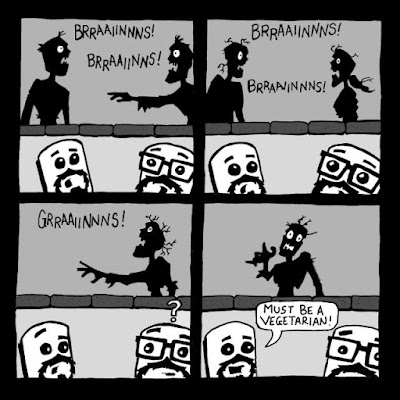 This is not the first comic that Stuart has created though and, as well as getting this Outstanding comic in paperback, you can pick up his back catalogue as part of the perks on this Kickstarter with Hello to Jason Isaacs and March of the Robot: Long Walk Home [or BOTH if you have missed out on them before - Ed] available in perk bundles. There's also the chance to own a piece of original Mulrain artwork too, with hand drawn pages from the comic included in the limited edition top tier perk - you'd better be quick though as they're almost sold out.

The Kickstarter is already fully funded, having hit its target a mere six hours after launch, which means that the comic-book will definitely get printed, so now supporting the Kickstarter is the ideal opportunity to pre-order the book [or "books" - get your festive shopping started NOW - Ed] and become the owner of a comic-book featuring characters that really are "Outstanding In Their Field!"

Find out more about the book, The Nerds and True Believers Comic Festival, and support The Nerds' Kickstarter HERE.