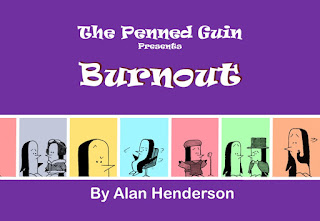 With the 16th Penned Guin book by Alan Henderson currently crowdfunding on Kickstarter, Susan Omand chills out with Burnout...

It’s a year since lockdown first started, you’re sick to the back teeth of banana bread, Zoom is now more of a sideways stagger and your cat knows more about spreadsheets than you do. Your world is desperate for some stupid jokes, bad puns and monochrome mayhem before you reach … BURNOUT!

Handily enough, Burnout is also the name of Alan Henderson’s latest Penned Guin comicstrip collection that is currently crowdfunding on Kickstarter and, in my humble opinion, it’s absolutely the funniest one yet! Every page had me laughing, like proper out-loud laughter, as the wordplay was sharper, the puns cleverer and the penguins penguiner [not a word – Ed] than I have seen them before. Special mention must go to two comic-strips, the first about Camouflage Club and the second about the Judgemental Butterflies, as they were the absolute standouts for me. But I also want to share with you my top five punchlines from some of the other pages [no context, no spoilers – Ed]

Ha, see? Intrigued now, aren’t you? [or making up your own jokes – Ed.] To further tickle your funny-buds then, here’s a sneak peek at a few more of the comic-strips from the book. 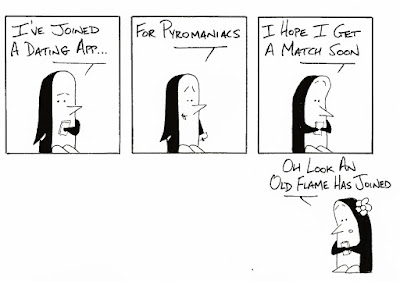 So, now that you’re desperate to get your sticky flippers on the book itself by pre-ordering on Kickstarter, what other goodies could you p-p-p-pick up [no! – Ed] by supporting the crowdfunder? As well as being able to get the 100-page book in either digital or paperback, or filling out the gaps in your back catalogue with the two books that came out last year, Vision and Coincidence, you can become the proud owner of one of the 180 original hand drawn comic strips. You can also create your own Penned Guin puns with a set of 3 magnetic comic strip panels or you can commission your very own exclusive comic strip page from Alan. Best of all though, you can get one of the incredibly limited edition Alfred Hitch-guin t-shirts that are exclusive to the campaign! Not to be squawked at indeed.

The Kickstarter is already fully funded, so the book is definitely going to happen, and it runs until April 10th. Find out more and back the Penned Guins here.