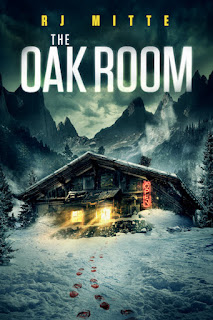 Lightbulb Film Distribution has shared the poster and trailer for a new claustrophobic thriller, The Oak Room, which is coming to Digital Download next month...

The Oak Room is a sinister thriller from Black Fawn Films (the team behind I’ll Take Your Dead and Vicious Fun). Directed by Cody Calahan (Let Her Out) the film stars RJ Mitte (Breaking Bad), Peter Outerbridge (V-Wars) and Ari Millen (Orphan Black).

During a raging snowstorm, a drifter (RJ Mitte) offers to settle a debt with a grizzled bartender by telling him a story. The night's events quickly spiral into a dark tale of deceit, mistaken identity and shocking violence.

Commenting on the release, Matthew Kreuzer, Commercial Director at Lightbulb Film Distribution, said: “The Oak Room was one of the highlights of Fantasia last year, and we are thrilled to be bringing this dark thriller to UK, Ireland and ANZ audiences in April. The film is both haunting and disturbing in equal measure and RJ Mitte’s performance is outstanding.”