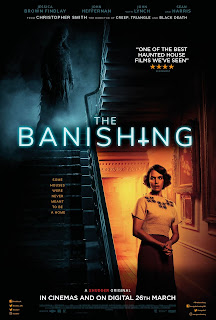 With the film released on Digital Platforms on Friday, courtesy of Shudder & Vertigo Releasing, Ren Zelen watched The Banishing...

The question arises in Christopher Smith’s haunted house film The Banishing, as to what exactly needs to be banished? Ghostly presences certainly, but there is so much more wickedness here that is troubling and oppressing the inmates.

Set against the backdrop of the rise of Fascism across Europe, questionable aspects of the church, and the sins of men perpetrated upon women, the film would seem to be a timely examination of how certain evils infest the world, and of how little we learn from the past.

Director Christopher Smith has a respectable track record in horror film, having under his belt a monster movie (Creep 2004), a period piece (Black Death 2010), a lost-at-sea mind-bender (Triangle 2009), a Danny Dyer horror/comedy (Severence 2006) and most recently a road-trip thriller (Detour 2016).

In his latest feature, The Banishing, he tackles the ghost story, working from a script by David Beton, Ray Bogdanovich and Dean Lines. The film concerns the plight of Marianne (Jessica Brown Findlay), the new wife of young vicar Linus (John Heffernan). She joins him in a new parish shortly after their marriage, bringing with her a daughter, Adelaide (Anya McKenna Bruce), a stepchild to Linus.

Marianne is full of good intentions to build a family life and be a vicar’s wife. However, things are not as straightforward as they might seem at first. Her husband Linus is a bundle of neuroses, too repressed and guilt-ridden in his religious beliefs to succumb to sexual consummation.

Likewise, it transpires that the child Adelaide has been claimed from an orphanage where she was abandoned as a baby, and Marianne has passed her off publicly as her sister’s child, although she insists to Adelaide that she herself is her mother.

The prologue to the film reveals to us that dark deeds have already occurred in the vast old house that the new family has moved into, deeds that are being covered up by the church, as represented by the severe and slightly menacing Bishop Malachi (John Lynch).

It seems that Bishop Malachi is at loggerheads with a local expert in the occult, Harry Price (Sean Harris) a flame-haired, hard-drinking, tango-dancing psychic investigator. Price knows far too much about the house, the monastery that came before it, and the distinctly unholy acts of the monks therein. He also has some idea of Malachi’s part in a sinister ecclesiastical conspiracy and has been extracting information from the local doctor, Dr. Sutter (Jason Thorpe) who is stricken with an attack of conscience for his part in the cover up. 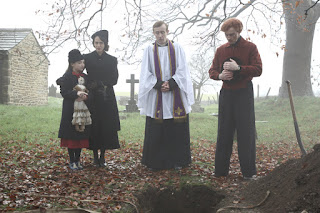 Price takes it upon himself to warn Linus to take his wife and stepchild away from the cursed house, as he has been recruited under false pretenses and told falsehoods about the family who lived there before, but Linus chooses the believe his Bishop rather than the dubious local weirdo.

It seems that there are plenty more skeletons rattling around than just those that Marianne might have in her closet. Soon her daughter Adelaide begins to withdraw into a world of imaginary friends, speaking about another ‘mummy’ and playing with an eyeless doll she has found in her room.

Marianne too starts to notice something odd involving a mirror first found in the basement and then in the hall. Tough as she is, but with no support forthcoming from Linus, she begins to doubt her own sanity and urged by her deaf housekeeper Betsy (Jean St Clair), she seeks answers from the wild-eyed outcast Price, who had previously been unceremoniously thrown out by her jumpy husband.

Director Smith utilizes plenty of the usual ‘haunted house’ tropes - spooky mirrors, sinister hooded figures, creepy dolls and a child possibly being misled or corrupted, but they’re delivered effectively. The Banishing may be a ghost story, but it’s also a character drama in which everyone has to face their own personal demons.

Heffernan’s plays Vicar Linus as a man whose nerves are constantly close to breaking point (we may remember his Jonathan Harker in the BBC’s recent Dracula) while Sean Harris goes full-on as the unnerving, tormented Harry Price.

Grounding the film is Brown Findlay’s Marianne, a hardheaded woman trying to subjugate her passionate nature to fulfil the role of respectable vicar’s wife but clashing with her husband’s views of appeasement with the Fascist threat - she says non-resistance makes the nation complicit while he maintains that violent retaliation is inherently wrong.

Despite the veiled threats of Bishop Malachi and his raking up of her past, she resolutely continues to seek for the truth surrounding the previous inhabitants of the house and the monks of the monastery on whose site the troubled house is built.

Marianne’s story becomes that of women throughout the ages, enduring the controlling jealousy, the guilt-ridden desires, and the misogyny of men. The events that continue to echo through the walls and corridors of her house have happened before and will do so again, and Marianne herself is all too familiar with the contradictory demands that patriarchy makes of women.

Smith does a solid job in establishing a sense of malevolence in The Banishing. He evokes familiar gothic tropes, while integrating a moral subtext into his plot involving patriarchal injustices and political threat. How this conflict is worked into the journey the characters take while they wrestle with the evil in the house is well orchestrated, even if it all never quite reaches the crescendo we are hoping for.