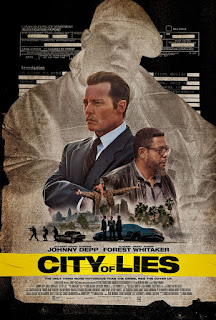 Saban Films has released a new trailer for the 2018 film City of Lies, starring Johnny Depp and Forest Whitaker...
Yes, you read that correctly, after several years of delay, some of us will finally get to see City of Lies. What do you mean, "what's City of Lies?"

Based on the book LAbyrinth by Randall Sullivan, about the murder investigations of Tupac Shakur and The Notorious B.I.G. City of Lies stars Johnny Depp as retired detective LAPD Russell Poole and Forest Whitaker as a journalist, Jack Jackson, who teams up with Poole in search of the elusive truth of the murders that Poole has being trying to solve for the past 20 years. Together they explore why the case remains cold - and why a secret division of the LAPD is seemingly set on keeping it that way.

The film was pulled back in 2018 before its general release, due to some "legal trouble" but is now slated for a US cinema release on March 19th before making its way to VOD/digital platforms on April 9th when, hopefully, we in the UK will get to see it too.
Image - Saban Films
Email ThisBlogThis!Share to TwitterShare to Facebook