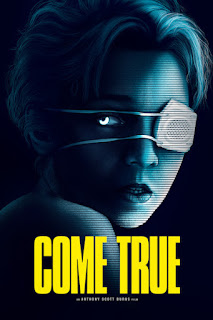 Out today in some places, thanks to Lightbulb Film Distribution, and available on Digital from Monday, Ren Zelen watched Come True...

It’s worth pointing out that writer/director Anthony Scott Burns also happens to be the editor and cinematographer for his film Come True - a Sci-Fi feature that proves to be distinctive in terms of its style, storytelling and its particularly striking visuals.

Burns’ film lures the viewer into the world of sleep study, hallucination and waking dreams. Young Canadian actress Julia Sarah Stone plays Sarah, a troubled college runaway who is so determined to avoid her mother (we never learn the reason why) that she spends her nights sleeping on a children’s slide in a local playground.

Isolated, with no one to rely on and struggling with recurring nightmares, Sarah comes across a flyer advertising for paid volunteers for a university sleep study. It seems like godsend - a safe haven where she might get some peaceful rest and an easy income.

Sarah is accepted for the study and settles into her night-time routine where she is wired up in a full-body sleep suit. However, there is something unsettling about the secrecy surrounding the proceedings and being tested and observed only seems to make Sarah’s disturbing dreams more vivid. She becomes the primary source of fascination for the team conducting the investigations.

Sarah begins to notice that a particular young man is often present in the places she frequents during the day. His name is Jeremy (Daniel-Radcliffe-lookalike Landon Liboiron) and Sarah is shocked to discover that he is the man who is the brains behind the methods used to gather data regarding the sleeping patterns of the test subjects.

After a rocky initial confrontation following some shocking results in response to their unorthodox testing procedures, Sarah threatens to leave the program - unless Jeremy breaks the rules and explains to her what their research is aiming at.

It turns out that Jeremy has discovered a method of turning the sleepers’ brain readings into visual images and the team are able to ‘see’ the dreams that the sleepers are experiencing. The scientists can watch a fuzzy image on a screen which shows a subject’s dream, giving us tantalizing glimpses of what is present in the shadows of their subconscious.

Soon the team make an extraordinary discovery about their test subjects which is supported by Jeremy, who is also monitoring his own dreams.

It is director/cinematographer Burns’ portrayal of the dream realm which is a key attraction of Come True. He creates a fascinating dreamscape - in flickering, misty monochrome we slowly track through floating doors and corridors, past strange objects and splintering figures. We glide inexorably through the darkness and shade towards one, monumental, possibly terrifying entity.

Burns has many unsettling tricks up his sleeves, and his haunting dreamscapes take on the languid sensation of sleeping itself. We have references to Jung’s architypes, and the dream images contain nods to primal and quasi-religious imagery (it’s all far more poetically surreal than the mundane and prosaic aspects of actual dreams).

Burns makes great use of mirages and vague imaginings to create an apprehension of what we can't quite see and what might be waiting through the next opening. He creates the impression that everything may be building up to something larger or deeper. Sarah’s sleepwalking marathons and dream wanderings are echoed by her meandering bike rides during bouts of insomnia, that seem to be heading somewhere, but aimlessly circle through a deserted night-time cityscape.

Burns draws the viewer into his story by infusing it with a hypnotically compelling tone instead of obvious plotting. He doesn’t entirely follow a predictable structure. He builds up his sequences with care and detail, achieving something that mixes lo-fi ingenuity with Cronenberg-like dread and dreamy, blue-drenched Lynchian surrealism. His vision is supported by a score by Pilotpriest and Electric Youth.

Julia Sarah Stone delivers a very impressive performance, as does Carlee Ryski as the only female member of the sleep study team. Both instil the proceedings with a sense of awe, mystery and tension which help to keep one watching for what might happen next.

Come True is a bold, ambitious, and creative piece of work with some excellent, emotional performances. It is possible that its slow-burn revelations, leisurely pace and odd, controversial ending may ultimately serve to polarize viewers, however, Come True deserves to have the attention of cinephiles at least once, to experience a unique concept portrayed in fascinating images and with cinematic inventiveness.

Come True will be released in Cinemas from 12th March, on Digital Download from 15th March, and on Limited Edition Blu-ray from 5th April