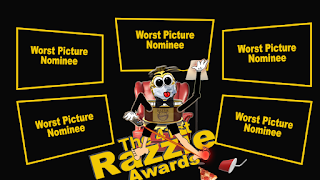 It's that time of year again as the film world celebrates the best of the best in their awards season, we can always rely on The Golden Raspberry Awards to remind us of the best of the worst films in the past year...
A global pandemic… A year full of panic… 365 Days of unrelenting bad news. As calendar years go, The Entire World would agree: 2020 Deserves Its Own RAZZIE® Award...

... And so it will be! Among the “honours” bestowed at April’s 41st Annual Golden Raspberry Awards will be a Special Governors’ Trophy to The Year 2020 as “The Worst Calendar Year EVER!”​
Meanwhile, the regular Razzie categories, which have been around for four decades, will be given out as well, in a ceremony that is traditionally held on the eve of the Academy Awards. This year, two films lead the way with six nominations each for 365 Days and Dolittle, closely followed by the Fantasy Island horror reboot, which got five nominations, including TWO for Worst Supporting Actress.
With new Academy guidelines allowing non-traditionally released titles to compete (and the Razzies following in their footsteps) this year’s Worst Picture nominees include:
The first-ever foreign-film contender, 365 Days which is apparently Polish remake/rip-off of past Razzie “winner” Fifty Shades of Grey [shudder - Ed];
Absolute Proof - the fact-free “documentary” financed by The My Pillow Guy Mike Lindell, claiming the 2020 Election was “stolen” from 3-Time Razzie “Winner” Donald Trump;
Dolittle - which did even less being released just before The Worldwide Lock-Down;
Fantasy Island - An oddly shlocky choice of “Re-Imagining” of the old TV series ["Explain, boss, Explain!" - Ed;
and Sia’s directorial debut, the well-meaning but widely derided Music.
Yes, quite.
Again the acting roles throw up a few starry names that should have known better, including Glenn Close for her turn in Hillbilly Elegy which, conversely, has also earned her an Oscar nomination this year [so bad it must be genius? - Ed]. The film itself is up for two other Razzies this year, for Worst Screenplay and Worst Director for Ron Howard! [Really? Yikes, it must be bad then - Ed] It's also quite surprising to see the Wonder Woman sequel in the nominations this year but it had a lot to live up to after the first one.
Anyway, here's the nominations announcement video which is always good for a giggle.

Here's the full list of the 41st Annual RAZZIE® Award Nominations* as Susan Omand goes Raspberry picking with her choice of Award "winners" in her "should blow/will blow" selections. You can point and laugh at her choices as the real award recipients are announced on 24th April...

365 Days (Polish Remake/Rip-Off of Fifty Shades of Grey)
Dolittle (Remake)
Fantasy Island (Remake/”Re-Imagining”) *SHOULD BLOW*
Hubie Halloween (Remake/Rip-Off of Ernest Scared Stupid)
Wonder Woman 1984 (Sequel) *WILL BLOW*
* Side-note - no mention yet of a Razzie Redeemer Award for this year, so I guess nobody bad enough before was good enough now.
Email ThisBlogThis!Share to TwitterShare to Facebook