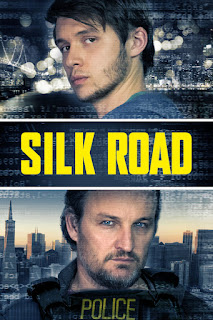 With the film now available on Digital Platforms, Steve Taylor-Bryant logged on to watch Silk Road...

Inspired by larger-than-life actual events, this crime thriller follows the rise and fall of Silk Road, the infamous darknet site that sent a seismic shock through the World Wide Web. Young, idealistic, and driven to succeed, Ross Ulbricht (Nick Robinson) creates the internet’s first unregulated marketplace: Silk Road. But when it becomes a multimillion-dollar pipeline for illicit drugs, Ross is set on a collision course with Rick Bowden (Jason Clarke), a disreputable and dangerously unpredictable DEA agent, who will use any means necessary to take him down.

David Kushner’s 2014 Rolling Stone article Dead End on Silk Road: Internet Crime Kingpin Ross Ulbricht's Big Fall, like most of the stuff I’ve read of Kushner’s, was fascinating. Indepth and educational journalism is rare these days but sometimes you just stumble upon greatness almost by accident; I read the Silk Road article after enjoying Kushner’s look at why 4Chan founder Christopher Poole left his site, and either of those pieces would make an excellent backdrop to a documentary about the subjects they cover, but a film? Don’t get me wrong, we’re talking about one of my favourite subjects here, but documentaries tend to do the articles or books more justice than a movie does purely because of the lack of reality in a film. Remember The Fifth Estate? Enjoyable but, Cumberbatch aside, it didn’t carry the weight of Leigh and Harding’s book, or Domscheit-Berg’s for that matter, and wasn’t anywhere near as good as Alex Gibney’s brilliant documentary. So how would Tiller Russell’s adaptation of a journalistic piece turn out?

Well... pretty much like The Fifth Estate really. The story just isn’t as interesting when it’s slightly fictionalised to play as character pieces, it drags quite a lot, doesn’t really make the audience pick a side and, if you’re watching this without prior knowledge that it’s based on real people and actual events, you’ll wonder what you’re supposed to care about. There are some good performances and it’s not a terrible movie but it suffers from being style over substance and, unfortunately, the substance is what’s important in this matter. Nick Robinson as Ross Ulbricht is great, and Robinson is obviously a talent, and Jason Clarke was his ever-reliable self but, whilst Silk Road is very watchable, I finished with a huge sense of disappointment.

It may be that my disappointment is caused by my knowledge that previous non-documentary films I've watched which also covered these fascinating real people and events, have lacked any real depth due to the facts of the cases being better than anything fiction can bring to it, so I may be tarring Silk Road with the same brush. However, when you’ve seen that there can be excellent films based on internet pioneers or real journalists, like The Social Network or Spotlight, you can only hope that, one day, all similar films will be as gripping. One day we will get a movie based on one of these situations/groups/people, maybe directed by someone like David Fincher or a filmmaker of that stature, and it will blow me away. Alas, today is not that day.
Follow Steve on Twitter @STBWrites
Image - Vertigo Releasing
Email ThisBlogThis!Share to TwitterShare to Facebook