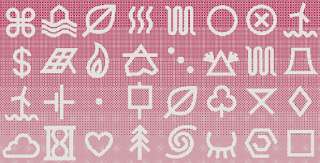 London’s leading festival of experimental games Now Play This returns tomorrow (25th March) with a new four-day virtual programme packed with interactive games, workshops, and conversations for people of all ages to enjoy from home...

Press Release
Now Play This is a festival of experimental game design that normally runs at Somerset House in London each Spring, showcasing interactive and playful work as part of the London Games Festival. ​

The festival investigates how games culture and playful art intersects with the issues of our time, exploring the often-surprising ways in which games, across all styles and genres, relate to the things that matter in the real world: the climate crisis, fragile democratic systems or the politics of love.
Founded in 2015, the festival has introduced innovative and critical makers from around the globe to adventurous audiences of all ages and with many backgrounds. Over time, it has evolved to include performances, workshops, installations, walks, talks and commissions that extend across the year. ​Moving forward, with incoming festival director Sebastian Quack, Now Play This continues to celebrate the community, the sensitivity and the wild, pure joys of experimental game design – proving with each new inquiry: “This is now in play”.
This year’s edition, again presented as part of London Games Festival but this time all online, explores the climate crisis through games and play, inviting audiences to creatively interrogate the ecological issues faced worldwide today.  From taking responsibility for the fate of the planet in interactive simulations, to creating beautiful ecosystems or witnessing environmental destruction in imagined futures, Now Play This 2021 offers a unique gaming experience, forming an exciting and timely online series, open to all ages and abilities.

Players can enjoy a vast range of both individual and collaborative gameplay, created by an innovative community of makers, designers and artists, with new games becoming available each day of the festival.

• Audiences are invited to ‘take flight’ to the festival with a live launch event and discussion within games designer Hosni Auji’s Airplane Mode simulator, offering light-hearted escapism in a time where travel is restricted, simulating the delights and annoyances of the airline travel experience without the carbon footprint
• Repurpose, a micro-adventure that sends instructions to participants’ phones, encouraging people to get outside and explore the natural surroundings beyond their home, specially created for Now Play This

• Live role-play simulation of UN climate change negotiations in World Climate Simulation, where players can see the impact of their environmental decisions with live analysis from a digital modelling tool
• Interactive narrative game Villains and Heroes challenges players to uncover the identity of key players in climate change denial and disinformation campaigns, based on the real-life costume party hosted by multi-billionaire Robert Mercer shortly after the election of Trump in 2016
• New interactive design game Among Ripples offers players the chance to experiment with building and maintaining their own lake ecosystem
• Fans of Age of Empires II can convene in the new online chatroom, The Garden of Earthly Delights a playful new work which allows users to transform into different species from the animal kingdom
• Venice 2089 invites users to explore a future of Venice, which once a significant tourism destination but now almost uninhabited, is struggling with the unpredictable behaviour of tides
Now Play This 2021 runs from 25th –28th March 2021 online.  For more information visit: https://nowplaythis.net/
Here's the full schedule of events over the four day Festival: 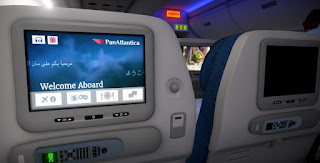 Thursday 25 March 2021 | What Do You Need to Have Fun?
Now Play This opens with a spotlight on projects that help us think about the infrastructures behind the way we play.

Flying to the Festival
Live Play Event | 15.00 | Register for free online
To launch Now Play This 2021, the team invite audiences to ‘take flight’ to the festival with a live event and discussion on what we need to have fun within Lebanese designer Hosni Auji’s Airplane Mode simulator. Offering light-hearted escapism in a time where travel is restricted, the game simulates the airline travel experience, without the carbon footprint, from your seat and the seatback in front of you, to the contents of your carry-on bag and in-flight entertainment, to the behaviours of cabin crew and other passengers.

Repurpose
Activity | Play Anytime
Game designers Amy Strike and Tom Williams invite the public to join them on a meditative journey that begins within your home and leads you into the outside world. Delivering instructions and invitations through your phone, Repurpose is a self-guided micro adventure questioning how we consider and use objects in our surroundings.

Greener Games: One Studio’s Approach to Sustainability
Talk | 18.30
Now Play This join London-based games studio Space Ape to discuss how they
achieved their goal of becoming a carbon negative company and to share their thoughts on how we too can be more sustainable.

New York-based independent game developer Danny Hawk hosts a streamed talk exploring the emergence and explosion in popularity of folk games on the video sharing platform TikTok over the course of the pandemic.

Communal Festival Space designed by Tiz Creel + Festival Party
Activity | Available to access across the weekend
Tiz Creel, Mexican born and London-based artist and game designer, presents a 2D-social space for Now Play This 2021. Users can enjoy communal games, live events and a festival party all within a new digital work inspired by the festival line-up and architecture of Somerset House. See full schedule online for timed events in this space. 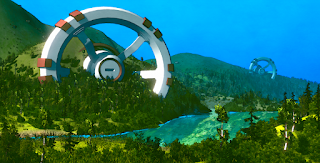 Friday 26 March 2021 | You Fix the Climate!
Day two of the festival highlights the more than 30-year-long tradition of games that present the climate crisis as a problem for players to solve, inviting audiences to experience how it feels to be responsible for the fate of the planet.

Climate Change Games and Research – An Open Exchange
Workshop | 13.00 | Register for free online
Hosted by game designer and urban geographer Jana Wendler, this workshop brings together climate researchers and game designers for a frank exchange about the hopes, fears and realities of communicating scientific knowledge through games and changing perspectives in Play.

Cards Against the Climate Crisis
Live Play Event | 18.30
Audiences are invited to join designers and activists in playing and discussing two board games, Ecologic and Carbon City Zero, both of which explore the climate crisis in different ways, from balancing extracting minerals from the landscape whilst offsetting damages, to developing a sustainable city. 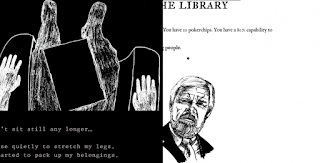 Saturday 27 March 2021 | Beyond Repair
Challenging the notion that the climate crisis can be solved or fixed by players, Day 3 sees Now Play This go “Beyond Repair”. The festival will present critical work that directly addresses the powers behind environmental destruction and imagines futures in which the damage has become irreparable.

Writer and games researcher Emilie Reed invites audiences to engage with critical games writing and the themes of the festival through contributing their own writing, micro-games, or calls to action about gaming's relation to economic and ecological issues. Contributors will be invited to come together for sharing moments and reflect on everyone's submissions through dedicated sessions

Artist Nicholas O’Brien presents The Last Survey, a narrative essay game in which players take on the role of a geologist advising a Brazilian mining company and must make critical choices to save the Earth’s exhausted metal reserves or witness the consequences.

Software artist and writer Marloes de Valk presents an interactive narrative game based on a real event: the costume party hosted by multi-billionaire Robert Mercer shortly after the election of Trump, December 2016. Players must try and uncover the identity of the disguised guests – among them key players in climate change denial and disinformation campaigns, without exposing themselves as an uninvited guest.

Artists Nicholas O’Brien and Marloes de Valk (creators of The Last Survey and Villains and Heroes) join the Now Play This team to discuss games that explicitly explore bad actors in terms of the climate crisis.

Presented by Italian development team, Safe Place Studios, Venice 2089 follows disaffected teen Nova who is visiting her grandfather in a rapidly sinking Venice. Players are invited to explore the city through the eyes of Nova, which once a significant tourism destination but now almost uninhabited, is struggling with the unpredictable behaviour of tides.

Even in Arcadia
Activity | Play Anytime

In this experiential narrative game by Phoebe Shalloway, players can explore and eavesdrop on characters in a hyper-capitalist future on Earth, where corporations develop and move society to new planets, and dispose of the old planets like smartphone models.

The creators of Venice 2089 and Even in Arcadia join the Now Play This team to discuss games that look at a future in which it might be too late. 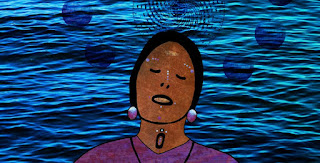 Day 4 sees Now Play This present works that give space for reflection and imagine other ways of relating to the natural world.

Become an alien, or a slime mold, or a rock, in this playful online live action role-playing game from international artists Alen Ksoll, Margherita Huntley and Natalia Skoczylas which premieres at Now Play This. Participants inhabit various new characters to start addressing the challenges of the anthropocentric climate crisis.

Canadian developers SCRNPNT return to Now Play This with their new online work Garden of Earthly Delights, a chatroom which allows users to transform into different species from the animal kingdom of Age of Empires II.

Honour Water is a singing game for healing water that passes on songs in Anishinaabemowin, the Anishinaabe language, presenting water teachings and singing challenges alongside art by Anishinaabe artist Elizabeth LaPensée. For Now Play This, players can enjoy an exclusive interview with the creative team behind the game.

Dutch developer Yan Knoop premieres Floating Point Leviathan, a new game which provides players with a single implied goal to hunt a whale, however once the creature is hurt, the world too fractures around it, challenging viewers to face consequences of the damage caused.