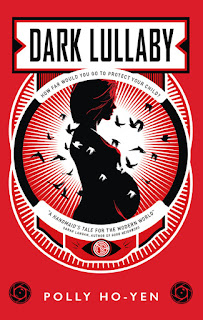 With the book published today by Titan Books, we're excited to share a short excerpt from the Dystopian thriller Dark Lullaby from Polly Ho-Yen...
now
Thomas won’t be able to ring me.

I left my phone, along with my wallet, in my bag back at the apartment, in my rush to leave. When we rid ourselves of our goSpheres, Thomas bought us old mobile phones so we would still have a way of contacting each other if we got separated. We were told that they would be able to trace us through our goSpheres and so they had to go.

Though he has no way of reaching me, and no way to follow, my eyes keep darting to the mirror, to the road that grows behind me.

I only remembered I left my bag behind as I kicked the car into gear and started to reverse away. I slammed down on the brakes as soon as I realised, my mind flashing to the bundles of cash stored within it. The door of the maisonette remained closed. Thomas was not running out after me. I could go back in, quietly, retrieve my bag and leave again. But something stopped me. Just the thought that Thomas might wake, that he might talk me out of what I was about to do. We’d recharged the phones the night before, the power level is still at the maximum. I reached into my coat pocket and found a few notes folded into rectangles there – enough money to fill up again if needed, enough not to risk me running into Thomas. I drove on, leaving my bag and its contents behind.

It’s very early in the morning and I haven’t seen another car but I can’t shift the idea of Thomas pursuing me. He won’t let me go easily.

He could tell the police to look for me. He might say to them that I haven’t been in my ‘right mind of late’ – a distant sort of phrase that I’ve heard pass his lips when he thinks I’m not listening. He could tell them about the bottles of pills on the small glass shelf in the bathroom. Another extension of me I have left behind.

I would have to change cars if that happened. Change my appearance – hack off my hair that’s grown longer than it’s been since I was a child. Bleach it brassy in a public toilet? Find some dark glasses that dwarf my cheeks and shield my eyes?

But he won’t contact the police. He can’t. They will already be searching for us.

I push my foot down harder on the accelerator and the car speeds up, the landscape blurs as it races past me.

I savour being alone. I turn to the passenger seat next to me – steel-coloured and empty – and experience something like a rush of happiness, though it is not so uncomplicated, that no one’s there.

Part of it’s down to wanting to be able to remember freely. For too long, I didn’t realise that Thomas noticed when I was remembering. I didn’t know that my arms were moving, rearranging themselves to hold her in an empty embrace. I would murmur sentences under my breath. I’d tilt my face to the side as I did when I used to speak to her.

‘Stop it, Kit,’ he said one day when I was quite lost in a memory.

‘Doing what you’re doing. Pretending she is still here.’

I wasn’t pretending, though; I knew that she was gone. What I was doing was remembering, reliving something that happened so keenly that my body literally went through the motions. The whole of me ached for her. My breasts became swollen with milk, solid and hard. Each time I pumped to keep up my supply, I tried to block out the rhythmic drone of the breast pump and imagined I was feeding Mimi. It’s advice I was given to help me produce more milk – to think of your baby – but in fact it was impossible for me not to imagine her as the bottle would fill, drop by drop, like tears falling. I had to tip it all away, the milk that was still warm from my body. I would pour it into the sink, run the taps and watch it drain down the plughole in a diluted white swirl.

My breasts grow heavier as I drive; it’s almost as though they could become separate entities to me. I’ve left my pump behind and so I will have to hand express before they become engorged, before the burn of pain sets in. Part of me likes this, this physicality of being a mother that I carry with me; a memory of Mimi that lives on in my body – tangible and real.

In those first empty moments after they took her, I poured over all the photos and videos I had of her stored on my goSphere. I trawled through the gallery, greedily swiping at the next image, the next clip, until Thomas told me it was time to go. I knew that I had to leave the goSphere behind but I hadn’t quite prepared myself for not being able to take those digital albums we’d made of her with us. After that, I would spend time lost in my own imagination, conjuring her from memory to recreate moments we had once shared together.

I often thought back to a particular rainy day. It was so wet I had dressed her in some puffy waterproof all-in-one suit and by the time I had finished and pulled up the hood, all I could see was a tiny circle of her face. Only the very top of her mouth, her nose and eyes were visible.

I would remember reaching out with one finger and pressing the red tip of her nose and making a silly sound, something like a trumpet or a horn or a beep. That was what Thomas had seen me doing: reaching out with a pointed finger to touch the air in front of me, to touch her nose as if she was still before me, the faint sound of a trumpet lingering on my lips.

‘I wasn’t doing anything,’ I said.

‘Kit,’ Thomas said, with a sigh. ‘Your face changes. You’re imagining her again.’

I didn’t have any rebuke, but from then on, I always made sure that when I wanted to remember Mimi, I was alone.

Now, in the car, I luxuriate in the absence of others. It makes me realise how long it’s been since I’ve been truly alone. Thomas has always been within reach since she went.

Maybe he is afraid of what I would do if I was left alone.

Thanks to Titan Books and Polly Ho-Yen for allowing us to publish this exclusive excerpt from Dark Lullaby.


HOW FAR WOULD YOU GO TO PROTECT YOUR CHILD?
The world is suffering an infertility crisis, the last natural birth was over twenty years ago and now the only way to conceive is through a painful fertility treatment called induction. Any children born are strictly monitored, if you are deemed an unfit parent then your child is extracted. After witnessing so many struggling to conceive – and then keep – their babies, Kit thought she didn’t want children. But then she meets Thomas and they have a baby girl, Mimi. Soon the small mistakes, IPSs, build up and suddenly Kit is faced with the possibility of losing her daughter, and she is forced to ask herself how far she will go to keep her family together.
Dark Lullaby by Polly Ho-Yen is published today by Titan Books
Image - Titan Books
Email ThisBlogThis!Share to TwitterShare to Facebook