TV - The Man Who Fell to Earth 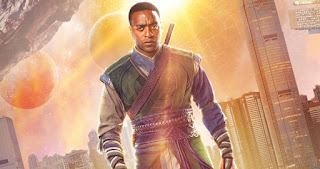 The highly anticipated upcoming original drama series The Man Who Fell to Earth, starring Chiwetel Ejiofor, is set to premiere exclusively on Showtime channel next year...


Based on the Walter Tevis novel of the same name and the iconic film that starred David Bowie, The Man Who Fell to Earth will follow a new alien character who arrives on Earth at a turning point in human evolution and must confront his own past to determine our future.

Alex Kurtzman and Jenny Lumet are writing and executive producing the series and with executive producer John Hlavin will serve as showrunners. Kurtzman will also direct multiple episodes of the series. Sarah Timberman, Carl Beverly and Heather Kadin are also executive producing. The series, which is moving to Showtime from ViacomCBS sibling Paramount+, is scheduled to begin production in London in April. The announcement was made by Gary Levine and Jana Winograde, Presidents of Entertainment, Showtime Networks Inc.

"We could not be more excited to bring The Man Who Fell to Earth to Showtime," said Winograde. "This provocative drama, beautifully written by Alex Kurtzman, Jenny Lumet and John Hlavin harkens to the original film but feels reborn in capturing the themes of modern culture while challenging our assumptions of human nature. Chiwetel Ejiofor is a mesmerizing actor who draws you in with every action, thought and emotion, and he will be a phenomenal force igniting this journey."

"Everything about this extraordinary story and its creative origins demands a bold, subversive approach to exploring what it means to be human in a world that's never been more connected and disconnected," said Kurtzman, Lumet and Hlavin. "David Nevins and the entire CBS Studios team have really inspired us with their passion for this legacy, and we're thrilled to call Showtime our new home."

Chiwetel Ejiofor is renowned for his portrayal of Solomon Northup in 12 Years a Slave, for which he received Oscar, Golden Globe(R), Screen Actors Guild and Film Independent Spirit award nominations, along with the BAFTA Award for Best Actor. He also received Golden Globe nominations for Dancing on the Edge, Endgame, Kinky Boots and Tsunami: The Aftermath, as well a pair of Emmy nominations for The Elephant Queen and Dancing on the Edge. He wrote, directed and was featured in The Boy Who Harnessed The Wind, and his extensive catalogue of film credits also includes Dirty Pretty Things (for which he won the British Independent Film Award), The Martian, Doctor Strange, American Gangster, Children of Men and Love Actually. On the stage, Ejiofor earned the Laurence Olivier Award for Best Actor for his performance in Othello in 2008.

The Man Who Fell to Earth is executive produced by Alex Kurtzman, Jenny Lumet, John Hlavin, Sarah Timberman, Carl Beverly, Heather Kadin and STUDIOCANAL's Rola Bauer and Françoise Guyonnet. The series is produced by CBS Studios in association with Secret Hideout and Timberman/Beverly. STUDIOCANAL owns the rights for both Walter Tevis' book as well as the Nicolas Roeg film with David Bowie.
Image - Showtime/CBS
Email ThisBlogThis!Share to TwitterShare to Facebook