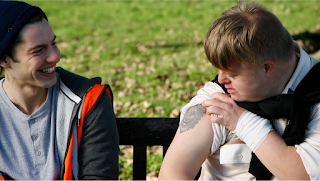 With the film getting its terrestrial TV debut this evening on BBC Four, a reminder of Steve Taylor-Bryant's thoughts on My Feral Heart...


When Luke, an independent and sensitive young man with Down syndrome, is forced to live in a care home after his elderly mother dies, he struggles to settle. Frustrated by having his wings clipped by unfamiliar rules; totally unimpressed by his new housemates and grieving for his Mum - his disappointment soon turns to wonder when Luke discovers a way out and begins to explore the surrounding countryside. When he is caught sneaking out by Pete, a troubled youth who tends the gardens at the Home, they strike up an unlikely rapport: Pete covers for Luke when he sneaks out and in return Luke helps Pete clear the garden. On an illicit excursion to the adjoining field Luke discovers a young injured girl in desperate need of his help…..This is Luke’s story.

I am probably the best and worst person to give an opinion on this film and both for the same reasons. I’m not an emotional person when it comes to other people’s relationships. I don’t cry at sad films (except Leaving Las Vegas) or enjoy mushy love stories and I tend not to feel sorry for characters or put myself in their shoes, comparing my own situations to theirs.

I realise this makes me sound a bit sociopathic (shut up) but don’t get me wrong, there are real, personal relationships that matter intensely to me, those who I love, that I would move heaven and earth for in order to give them a better lot in life and god help anybody who upsets them. For everyone else, real or imagined, as long as what you do doesn't hurt the people I love then you just carry on doing it, I’ll stay out of your way if you stay out of theirs. Yes I said “what you do” not “who you are” as it is the doing bit that affects others, not the being and, for this film, that distinction of defining people by their actions rather than anything else is important.

In the film, Luke, and the actor that plays him, Steven Brandon, has Down Syndrome. He’s not a victim or a sufferer, it’s not a disease and doesn’t need fixed or pitied, it’s just how he is because of an extra chromosome. That’s all. It is what it is, accept it, get on with it – no big deal. For me, the only reason it’s of any importance in the film at all is as a plot device to make his bereavement that bit more difficult for him to come to terms with due to a well-meaning but badly-judged decision of his mother’s, that he would need looked after when she died, whilst he was doing perfectly well looking after himself and caring for her too after she became ill. The expression on Luke’s face of “What the hell am I doing here?” when he is first taken into the dining room of the care home speaks volumes. 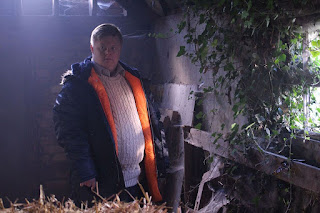 As well as Luke, the acting from the rest of the cast is strong and the dialogue is well written, making the majority of the characters’ backstories and interactions believable rather than clichéd, which it could have easily become. It was beautifully filmed too, some of the barn shots had wonderful lighting, and the soundtrack by Morse composer Barrington Pheloung was magnificent.

However I didn’t quite understand the thinking behind the film-maker's decision on adding yet another human relationship for Luke with the injured girl as the Feral Heart of the story. This seemed to be overdoing the personal relationship aspect a bit for me and the same effect could have been achieved with an injured bird, a stray dog or a fox instead. In fact, in the context of the story, a fox would have made a lot more sense as all that was needed for the plot was a helpless thing for Luke to care for. As it was, the girl’s character was not developed or given a background story at all and I was left wondering who and why but not really caring either way, so it all fell a bit flat for me and could have easily been changed or left out without affecting the rest of the film.

My Feral Heart reminds me of an episode of an afternoon drama series that was on BBC a few years back called Moving On. These were 45 minute long stand alone plays about ordinary people facing up to some kind of change in their lives and how they dealt with it. That’s pretty much what My Feral Heart should have been too instead of a feature film, as it comes across as just a padded out variation of that common theme and really not so different after all.

Images - My Feral Heart
Email ThisBlogThis!Share to TwitterShare to Facebook