Audio - Brixton: Flames On The Frontline 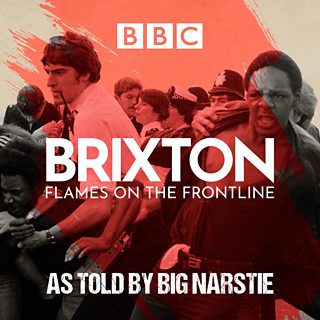 The 1981 Brixton protests had a huge impact on Britain, changing views on identity, racism and contemporary culture.

Presented by Big Narstie, this podcast explores the series of events that led to the uprising and how its legacy still affects Britain today. Told through interviews, archive audio, music and dramatised scenes written and performed by Black British talent, the story is presented via the perspectives of those involved.

Examining the pride, injustices, resistance and rage, which eventually developed into unrest and violence, this series will attempt to answer one complex question: why did the Brixton riots happen?

Brixton: Flames On The Frontline recounts key parts of the Black experience in the UK, including the use of police stop-and-search ‘sus law’ in the 1980s. It also covers the rise and impact of the National Front, the tragedy of the New Cross Fire, and the landmark demonstration, The Black People’s Day Of Action, which followed it.

The dramatic monologues featured in the series are written by award-winning playwright Roy Williams and are performed by Nathanial Curtis, Sheyi Cole, Valentine Olukoga and Peter Bankole.

Throughout the series, interviewees include leading figures of the Black Power movement, Leila Hassan-Howe and Farrukh Dhondy, former police officer Peter Bleksley, Paul Simonon of The Clash, who was one of the white protestors at the 1976 Notting Hill Carnival, and many other Brixton-locals who were involved in the 1981 riots.

As well as rich news audio from the time, archive audio was also provided by the Museum of London, via their oral history archive.

The series is presented by Brixton-born rapper, Big Narstie. Speaking of his involvement in the podcast, he says: “The reason I wanted to take part in this podcast is because I’m a Brixton native, and it’s part of my culture and heritage. The significance of the Brixton uprising was that people decided they would no longer sit quietly (and be a beating stick) - people had to stand up for themselves.”

"The Brixton uprising was the start of a process. Things have changed for the Black community in the sense of that people are no longer scared to fight for freedom or to stand up for themselves. It wasn’t just the Black community who took part in the uprising - a lot of people tend to forget this. While it was predominantly a Black protest, other colours and creeds could see what was happening and felt the need to join in. The riots were largely about Black people but white people could also see there was oppression. It happened because people felt they were being persecuted and oppressed."

Series Editor, Gail Champion, says: "What happened in Brixton 40 years ago was a defining moment for the whole of society. The country was shocked into action and began to ask questions about policing, racism, and identity. While much has changed, many of those issues are still hotly debated today. You can clearly trace the line from what happened 40 years ago to the Black Lives Matter movement of today.

“Starting in the ‘70s this series reveals what really happened to people in the decade before the riots to cause them to protest. A series of injustices shaped and tainted people’s lives and caused resentment to grow until it couldn’t be contained. And yes, there was violence, and criminal behaviour, but why did it happen? The series reveals the answer to that complex question."
Listen to the trailer for the series HERE.