Book - The Dangers of Smoking in Bed 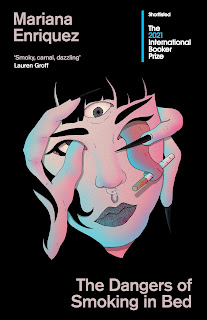 Tony Cross is reading all the books on the International Booker Prize shortlist ahead of this year's awards in June. Here are his thoughts on The Dangers of Smoking in Bed by Mariana Enríquez, translated by Megan McDowell...

Let me begin with a disclaimer. This is not a book I would normally read. It is a collection of short horror stories. I am not a massive fan of horror - even though in many respects it is but a short step from horror to my favourite genres: SF and Fantasy.

Actually, I am not sure if this is horror because I am not familiar enough with the genre conventions. There is certainly a supernatural quality to them all. Some are more visceral than others. There were certainly moments where I found myself discomforted by scenes in the stories, but I am easily discomforted. It is one of the reasons I avoid reading much in the way of actual horror. I am, if nothing else, a coward at heart. But there is certainly a gothic creepiness to the whole collection. There are ghosts, spirits, curses, Ouija boards, cannibalism (and/or vampirism) and the returning dead.

Some of the stories I found more disturbing than others: Angelita Unearthed, The Lookout (which had a particularly gothic feel to it. I was oddly reminded of Wuthering Heights, but that might just be me.); Where Are You, Dear Heart?; Meat; Kids Who Came Back and Back When We Talked to the Dead.

Mariana Enríquez is Argentinian and the last two stories in that list are influenced by Argentinian history. Particularly the 'disappeared': the victims of the military junta who were taken from their homes, tortured, murdered and then their bodies dumped who knows where. Their relatives still do not necessarily know where they are. Indeed, I have just realised that burials and disappearance are a key part of a number of these stories. But Kids Who Came Back and Back When We Talked to the Dead seem to be the most obviously hooked into that history.

The stories, though, also reflect the epidemic of violence against women, both physical and psychological, and how this manifests itself. They are, to put it obviously, not just horror stories. They are stories about violence, about history, about fame, about voluntary silences about difficult topics, about the consequences of how you treat people.

Whether a regular reader of horror will find them 'juicy' enough I cannot say. I found some of them really got under my skin. In a good way. They are beautifully written and Megan McDowell's translation seems to catch the style as well as the content of Mariana Enríquez's work neatly.

I enjoyed reading this book, even if it is outside my usual reading comfort zone. Whether it has inspired me to dip further into horror as a genre I cannot say yet, but if there are others as well written as this then perhaps I should. I will be trying to read some more of Mariana Enríquez's books, but it looks like only another collection of short stories is available in English. Hopefully, the success of this book will change that.

Follow Tony on Twitter at @Lokster71
Image - Amazon
The 2021 International Booker Prize celebrates the finest fiction from around the world, translated into English.