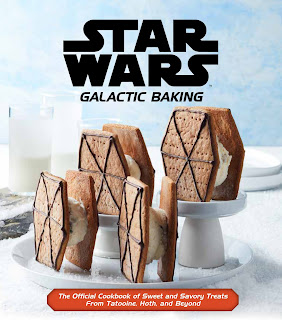 With the book out today from Titan Books, Susan Omand pours herself a glass of blue milk and delves into some Star Wars Galactic Baking...

Me: Oooh, nice. Titan Books have sent us over a new movie tie-in book to review.

Bossman: Oh, what is it this time?

Me: Star Wars, cakes and…

Yep, that’s right. We didn’t even have the “scones” discussion in the office this time, which is just as well because there aren’t any scone recipes in this book [SHOCK, HORROR – Ed.] There are, however, over 40 other recipes to choose from, both sweet and savoury bakes that are guaranteed to add to both smiles and waistlines. 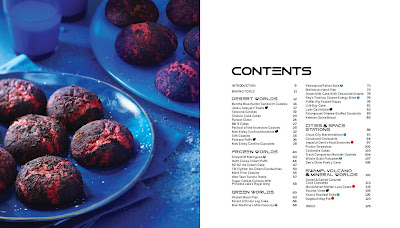 With some recipes handily marked up in the contents page as being “Lightspeed” (done in under 30 minutes) “Dark Side” (unctuously rich indulgent treats) or “Light Side” (less butter and sugar, more whole grains), there are five separate recipe sections in the book. 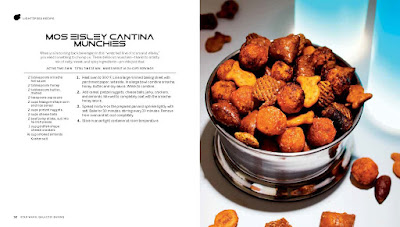 First up is Desert [not Dessert - Ed] Worlds with luscious individual cupcakes, blue-milk-dunkable cookies and snack size savouries like the Mos Eisley Cantina Munchies above, which are coated in a sriracha, honey, butter and soy sauce glaze to give a salty sweet but savoury crunch while you listen to the Cantina band. It’s also this first section that has my favourite looking cookie in the book: Sith Cookies (pictured further up on the Contents page). With a LOT of red food colouring in the Red Velvet interior, the cookies are rolled in cocoa before baking which gives them that wonderful “cracked lava” effect once they’re cooked. 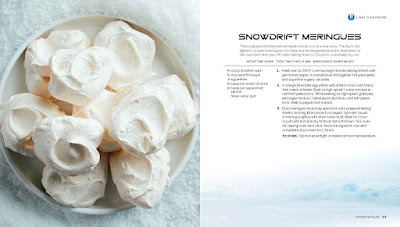 Next up is Frozen Worlds, a combination of light pastries and airy meringues, warming chocolate and more ice-cream than you can shake a Tauntaun at. The meringues above really do look good and the mint flavouring would definitely make them taste fresh and zingy. Perfect as an alternative to that after dinner wafer thin mint. 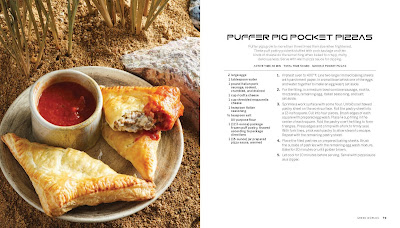 Green Worlds is next with all the tasty rations and campfire treats you’ll need for that picnic trip into the forests and jungles of exotic planets. My favourite recipe in this section is called Puffer Pig Pizza Pockets because it’s basically a sausage roll with added cheese that’s then shaped into a pasty. I mean, what’s not to like about that?

The final two sections of the book, Cities and Space Stations (sophisticated “food with friends” baking [coffee flavoured brownies! – Ed]) and Swamp, Volcano and Mineral Worlds, where the molten lava cake appears to be a cheesecake with a really neat twist, are more of the same. Scrummy food that looks fun to make and even more fun to eat.

If you take the Star Wars theme out of the book and just treat it as a baking, all the recipes look really tasty and there’s something to suit every skill level. Not going to lie, there’s a few recipes in here that I don’t think my bakery experience would let me tackle yet but they’re definitely something to aspire to. There’s also a very handy “basic equipment” page at the start and it’s great to have an index at the end that lets you find recipes by ingredient. Do bear in mind that this is an American book so measurements, temperatures and some ingredient names will need translation if you’re baking in a UK kitchen. I would also say that, because of the Star Wars theming, there’s a LOT of food colouring involved in the recipes to make them red or blue or green, so do check for any E numbers etc that may cause intolerances.

As far as the Star Wars-iness of the book goes, there wasn’t too much of a link in my opinion. None of the recipes featured in any of the films or series that I know of and the sections seemed to be quite arbitrarily compiled. I felt that some of the “connection to the brief” [who’s been watching too much Great British Menu recently? – Ed] also depended on having Star Wars shaped cookie cutters, using weird colours or being far more adept than average at getting recognisable designs in cupcake icing but I guess having Bantha milk as an ingredient in everything might be a little difficult to source for a lot of people.

All that said though, this would still make a fun gift for a Star Wars fan who enjoys clever new recipe ideas and I’m definitely going to try making those Sith Cookies!