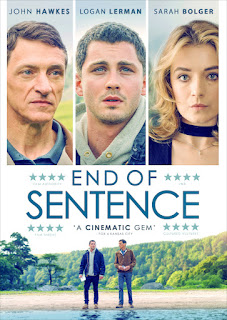 After being widowed, Frank Fogle (Hawkes) reluctantly embarks on a journey to honour his wife's last wish of spreading her ashes in a remote lake in Ireland and a promise of taking his estranged son Sean (Lerman) along for the trip. As Sean steps out of prison the last thing on his mind is a foreign road trip with his alienated father when what he needs is a fresh start in California...

After his travel plans collapse, he reluctantly accepts his father's proposal in return for a ticket to the West Coast and a promise that they never have to see each other again. Between a disconcerting Irish wake, the surfacing of an old flame, the pick-up of a pretty hitchhiker (Bolger) and plenty of unresolved issues, the journey becomes a little more than either the father or son had bargained for.

Unfolding across the stunning landscape of Ireland, End of Sentence is a hilarious and touching father and son road-trip from director Elfar Adalsteins that premiered to acclaim at the Edinburgh International Film Festival. Starring John Hawkes, Logan Lerman, Sarah Bolger and Ólafur Darri Ólafsson (Trapped). End of Sentence is an Icelandic and Irish co-production.
Blue Finch Film Releasing presents End of Sentence on digital download 10 May
Image - Blue Finch Films
Email ThisBlogThis!Share to TwitterShare to Facebook