On Wednesday next week (28th April), Raindance Film Festival's online Raindance Player platform will host the World Premiere of زهر | BLOSSOM...
Press Release
زھر | BLOSSOM is a short film about Gharbi, a young man in Tunisia, and Lauren, a young woman in London. Connected through their art and creativity, the audience is invited to see that despite the different cultural and socioeconomic contexts in which we live, we share the same struggles, emotions, and have the same values. زھر | BLOSSOM stars Anis Boughanmi as Gharbi and Leonor Plácido as Lauren.

The short film is the result of a new collaboration Dual Netizenship, supported and funded by the British Council that brings together Britain's Fully Focused Productions and Tunisia's Boubli. Created by young film-makers and artists across two countries, the creative team celebrates and showcases 50% females in lead roles: scriptwriters Kami and Asma Zraibia , director Ikram Ahmed and Director of Photography Domizia Salusest. The score includes specially created music by Dali Ben Farhat, Yassine Jlassi, Malek Ben Halim and Mohamed Amine Khaldi.
Thirty eight young filmmakers from Fully Focused Productions in the UK and Boubli in Tunisia met for the first time on 6 January 2021. In the 12 weeks that followed, without a single face to face meeting and a language barrier to overcome, 38 aspiring young filmmakers got to know each other, explored the things they have in common, and developed the concept and script for a unique film collaboration. They quickly homed in on the importance of creative expression and how the arts provide an opportunity to process difficult emotions and connect with others. This was the first time both organisations had been part of an international project.
Rosa Powlowski, Fully Focused Productions said “Our focus at Fully Focused Productions has always been to create opportunities for young people to explore their creativity and develop new skills. It has been truly uplifting to watch the team grow, support and inspire each other and it’s allowed our organisation to explore international, creative, cultural exchange for the first time.” 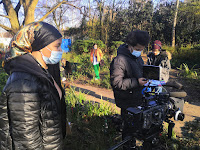 The film was shot on location in Tunis and London in March 2021. All filming took place in each country safely and under strict Corona protocols. It was made possible as part of Dual Netizenship, a British Council funded project.
Michael Bush, Projects Director at the British Council said, "Boubli is such an amazing initiative. I’ve seen the impact it’s been having in Tunisia and the reputation it has with Tunisian youth audiences. We knew Boubli and the young people working on it would have a lot to offer. We knew likewise that this is a space where UK youth culture are pioneers. Just look where Fully Focused productions has come from and what they have achieved!
"The means of media production have been democratised; more-and-more young people are able to take control of their own narratives and become broadcasters. This feels like the future and it’s time to start facilitating international connections and exchange between these initiatives. That’s what the Dual Netizenship project was about and BLOSSOM is an amazing achievement and symbol of this. Above all, at the beating heart of this film is the exchange, the learning, the connections and the relationships that have been built.”
This world premiere will take place as part of an online In Conversation event where filmmakers involved in the project will share their experience of collaborating, and discuss how film and alternative media are mediums that can inspire change and represent the voices of the next generation. The film will be hosted on Raindance’s online Raindance Player platform exclusively for two weeks following the premiere.
Elliot Grove, founder of Raindance said, "A festival of discovery, Raindance is known for championing the work of passionate and pioneering new filmmakers. Raindance recognises that young people are not only the future, but also the present - and that includes young filmmakers.
"The aim of this collaboration is to open new routes to involve more young people in the professional film industry, including young people from different cultures and backgrounds. As for the resulting film... what could be a more apt title than BLOSSOM - we look forward to it bearing fruit."
زهر | BLOSSOM is a film made by BOUBLI, Fully Focused Productions, Million Youth Media and in-tej 5orti and supported by the British Council. You can watch the film here: https://cinema.raindance.org/film/zhr-blossom/
Images - Dual Netizenship
Email ThisBlogThis!Share to TwitterShare to Facebook